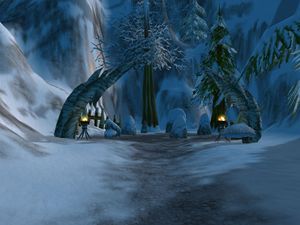 Unlike all other graveyard flags, the flag of this graveyard is located in relatively open plain. It does not offer any shelters for attackers or defenders.

As of patch 2.3, Commander Malgor has been removed. The graveyard is now only guarded by the four flag guards.