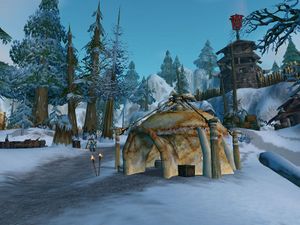 Frostwolf Village is the stronghold of Horde General Drek'Thar, located in the southern part of Alterac Valley.

Frostwolf Village is the homeland of the Frostwolf Clan, exiled before the first war by Gul'dan. It was under the guidance of Drek'Thar that Thrall came to understand his past, present, and future. With the arrival of the Stormpike dwarves, the extremely territorial Frostwolves have sought to drive them out of their ancestral valley, and have received military aid from the various members of the Horde in accomplishing this task.

Frostwolf Village is close to the Horde battleground entrance in the southern end of the valley. The village houses a number of Frostwolf civilians, quest givers, vendors and the military. It has a blacksmith for all blacksmithing needs and there are a few houses and wagons where vendors have set up shop selling food, drinks, reagents and offer equipment repair. The Frostwolf Quartermaster is located beyond the Frostwolf Keep entrance tower (the right exit). He offers his wares and quests to capture the valley's mines, Coldtooth and Irondeep.

It should also be noted that there are some vacant Troll-style houses outside the village's walls, but nearby. No one knows who live there, perhaps it is a home for the Frostwolf Legionnaires or Battleguards. Close by to these houses is the stables where the Frostwolf Stable Master and the Frostwolf Wolf Rider Commander live and seek out soldiers to collect ram hides and tame wolves to prepare the cavalry.

The primary entrance into Frostwolf Village is via an open gate in a wooden fence surrounding the stronghold. This gate and the village guard the core of the Horde military presence, Frostwolf Keep, which is protected by both the Frostwolf West and East towers defended by Frostwolf Bowmen. The Frostwolf Relief Hut is also located in the keep as well as the Wing Commanders' (Guse, Jeztor and Mulverick" domain. Inside the large garrison resides the leader of the Frostwolves, Drek'Thar, along with his two wolf pets, and the four warmasters (Iceblood, Tower Point, West & East). 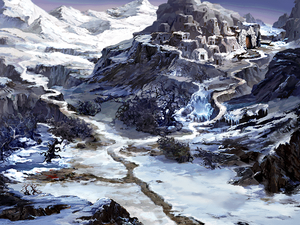