The Lich King on the Frozen Throne.

The Frozen Throne was the receptacle of the soul of the Elder Shaman Ner'zhul following his transformation into the dreaded Lich King. It stood atop a tall spire within a vast chamber. At the end of the Ascension of the Lich King, King Arthas entered the Throne Chamber, ascended the spire, and shattered the throne with Frostmourne. After the throne chamber collapsed and Arthas merged with Ner'zhul to become the new Lich King, he used the remnants of the Frozen Throne as a physical throne.[1] While the Lich King slept, Icecrown Citadel was built around the spire. 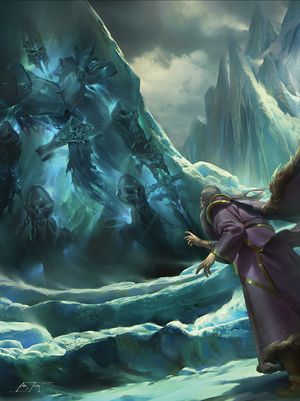 Kel'Thuzad and the Frozen Throne

“Ner'zhul's spirit was placed within a specially crafted block of diamond-hard ice gathered from the far reaches of the Twisting Nether. Encased within the frozen cask, Ner'zhul felt his consciousness expand ten thousand fold. Warped by the demon's chaotic powers, Ner'zhul became a spectral being of unfathomable power. At that moment, the orc known as Ner'zhul was shattered forever, and the Lich King was born.”

— The Birth of the Lich King

“When Kil'jaeden cast Ner'zhul's icy cask back into the world of Azeroth, the hardened crystal streaked across the night sky and smashed into the desolate arctic continent of Northrend, burying itself deep within the Icecrown glacier. The frozen crystal, warped and scarred by its violent descent, came to resemble a throne, and Ner'zhul's vengeful spirit soon stirred within it. From the confines of the Frozen Throne, Ner'zhul began to reach out his vast consciousness and touch the minds of Northrend's native inhabitants.”

— Icecrown and the Frozen Throne

During the Third War, a small band of paladins of the Knights of the Silver Hand traveled to Northrend. When they finally reached Ner'zhul's icy fortress, embittered by the trials they had to suffer through, they had become dark and brooding. The Lich King offered them untold power in exchange for their services and loyalty, and they accepted to become death knights to his service.[2]

Illidan Stormrage was charged by Kil'jaeden with destroying the Frozen Throne.[3] To this end, he recovered the Eye of Sargeras and brought it to Dalaran. Illidan and his naga summoners used the eye, combined with Dalaran's natural magical energies, to create devastating earthquakes that would tear Icecrown apart. The intervention of his brother Malfurion, along with his former jailer Maiev Shadowsong and Prince Kael'thas, stopped Illidan from completing his spell.[4] Though he did not succeed in destroying the throne, Illidan's spell did rupture it. As a result, the Lich King began losing his power daily.[5]

Fearing that Kil'jaeden would punish him for his failure, Illidan went to Outland, but the demon lord quickly found him and commanded that he try again.[6] Illidan led an army of blood elves (led by Prince Kael'thas) and naga (led by Lady Vashj) to Icecrown in a bid to attack the throne directly.[7]

Illidan was ultimately defeated by King Arthas, who ascended the spire and shattered the throne with Frostmourne. Arthas donned the Helm of Domination, which contained Ner'zhul's spirit, and they merged into the new Lich King. "The Frozen Throne" came to refer to the remnants of the crystal that Arthas physically sat upon as an actual throne.[1]

In the second World of Warcraft expansion, Wrath of the Lich King, the Frozen Throne serves as the final subzone of the Icecrown Citadel raid, where the Lich King is encountered and where Bolvar Fordragon is imprisoned. The area was rebuilt into a much more complex and extreme form at some point after the Lich King ended his dormancy.

During the third invasion of the Burning Legion, the champion death knight had to forge the Blades of the Fallen Prince from Frostmourne shard at the Frozen Throne.

In their quest to find the truth behind who whispered Vol'jin when he chose Sylvanas as warchief of the Horde, Vol'jin's spirit and the Horde champion traveled to Icecrown to ask the Lich King if he knew anything about it. 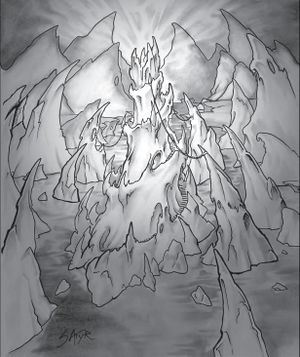 The Frozen Throne as it was depicted in Lands of Mystery.

The Lich King sits on the Frozen Throne at the bottom of the rift, and his glory and power are terrible. Four stone obelisks carved with runes of powerful magic surround it. Bridges of pale blue, translucent energy stretch from the obelisk platforms to the Frozen Throne. Jets of frost periodically spew blue flames into the air, and there are glyphs carved into the rocky ground surrounding the Throne. Whoever wishes to enter the Throne Chamber, to risk the Lich King's wrath, must activate all four obelisks.[8]

The exact description of the original throne chamber before its destruction has differed between sources. In Warcraft III: The Frozen Throne, it was described and shown as lying within a frozen peak at the center of a valley in Icecrown. The RPG described the Frozen Throne as sitting at the bottom of a rift made upon its impact. The novel Arthas: Rise of the Lich King implies that the throne chamber was deep inside a cavern within the Icecrown Glacier itself, which sat in the middle of a valley.

The short story Road to Damnation doesn't make reference to the cavern or rift (although the "very peak of Icecrown" is mentioned), but instead describes the Frozen Throne as sitting inside a massive chamber inside a citadel. This could be a reference to the overall fortified nature of the throne chamber. Both Arthas[9] and Kel'Thuzad[10] were said to have traveled downward before ascending the spire.

In Wrath of the Lich King, it seems as if the developers went with the original description from The Frozen Throne. Angrathar the Wrath Gate appears to connect directly to the current Icecrown Citadel via a tunnel drilled through a mountain. This mountain is most likely what's left of the original frozen peak that housed the throne chamber, though it stands further south than it was implied to be before.