Activate the Countermeasures in the Vault of Ice.

The Wardens kept all kinds of dangerous monsters locked up within this Vault. Now that Gul'dan's forces have breached the walls, it's proving rather... inconvenient.

Many of our forces are occupied with containing a fearsome magma destroyer in the southern chamber. With us freshly awoken from stasis, we don't have the means to take it down. However, we might be able to reactivate the room's containment field.

Go join up with Kayn. Do whatever it takes to seal that chamber!

I knew you could do it, <name>. We could not let that creature escape. 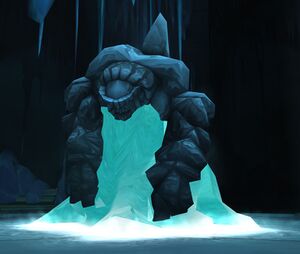 Ash'golm, trapped in ice once more

Head south into the Vault of Ice, where Kayn and three Freed Illidari are fighting Ash'golm. On approach:

Kayn Sunfury says: He is too strong! Our only hope is to reactivate the orbs and seal him inside the chamber!

Stay out of the fire on the ground and interact with the three Countermeasures orbs around the room to seal the giant in a block of ice.

Kayn Sunfury says: Well done! The monster is contained. Let's meet up with the others.
Kayn and the three Freed Illidari run out of the vault and despawn.

Head back to the western end of the Demon Ward and talk to Allari. Kor'vas and Falara have both left. After completing all of Frozen in Time,

In the chamber to our right is a fearsome magma destroyer known as Ash'golm.

Many of our brethren are inside. We do not have the strength to bring it down, but we might be able to reactivate the room's containment field.

Kayn went to assist the others, and he will need your help. Do whatever it takes to seal that chamber!