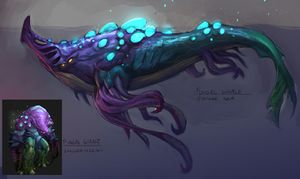 The fungal whale is a type of whale only seen in a piece of concept art for Warlords of Draenor. It was seemingly intended to be a resident of the Zangar Sea and a relative or predecessor to the fungal giants of modern-day Zangarmarsh.