From Wowpedia
(Redirected from Furbolgs)
Jump to: navigation, search

Furbolgs are a hulking, ancient race of bear-men who live in the northern regions of Kalimdor, in the continent of Northrend, and in the Broken Isles. Though they have no special love for war or murder, several tribes have fallen to multiple forms of corruption, including but not limited to the Burning Legion and the Old Gods.

The furbolg tribes of Ashenvale were traditional allies of the night elves. Concerned by the once peaceful race's condition, the night elves have attempted to help the furbolgs settle their tensions, but the mighty bear-men retreat ever further into their territories and fall deeper into the rage that is overtaking their race. Few tribes are now tolerant of outsiders, most notable being the Timbermaw. Meanwhile, the tribes of Grizzly Hills struggle to recover from the corruption Yogg-Saron placed upon their people.

Furbolgs have oral traditions that say they have ancient origins.[4] They descend from an ancient race of bear-men known as the jalgar. The jalgar warred with the Dragonflayer vrykul, but when the Dragonflayers gained the upper hand by learning to ride proto-dragons, the jalgar were pushed south into the central forests of Kalimdor.[5]

According to Brann Bronzebeard, the furbolgs are descended from the bear Ancient Ursoc.[6] Given the information above, Ursoc's direct descendants may actually be the jalgar race.

Though the furbolg were around at the time of the War of the Ancients 10,000 years ago, they did not take part in the war against the Burning Legion.

However, due to a disturbance in the timeline instigated by the Old Gods, the original timeline was altered. In the new timeline, due to the machinations of Krasus and Rhonin, the bear-men were convinced to join an alliance, consisting of the night elves, the earthen, and the tauren, against the Legion. It was a reluctant truce, since many night elves were xenophobic towards the "lesser races," but ultimately successful, and formed the foundation for much of the familiarity and peace between the night elves and later furbolg generations. (It should be noted that other accounts corroborate that this happened, proven by the fact that the blue dragonflight currently exists.) They were led by Unng Ak. 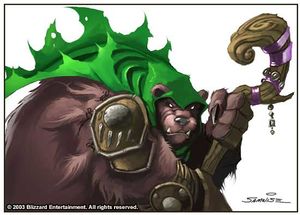 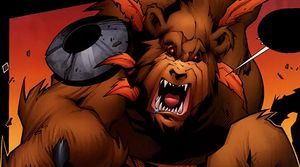 A furbolg in the comic.

After the war, the furbolgs formed positive relations with the night elves and tauren, though they preferred to live in peaceful isolation.[4] However, the furbolgs' close connection with the forests was exploited by the Burning Legion during the Third War.

During the war, a tribe of furbolgs stationed near the borderline of Ashenvale was attacked by Grommash Hellscream and the Warsong clan sent by Neeloc Greedyfingers because they had been harassing the goblin. The orcs killed their chieftain and several members, and Neeloc hoped that the tribe would disperse by the death of their leader.[7]

As the forests were corrupted, many furbolg tribes became tainted with evil or went completely mad, and began attacking their former allies and destroying the lands they once protected. Individual satyr such as Xandivious and Xabraxxis are also known to be responsible for the damnation of entire tribes.

What once were believed to be only whispers and rumors of attacks by savage and cruel bands of furbolg in the night elves' enchanted forest have become an increasing concern for the Sentinels. It is thought that the passing of the Burning Legion and the vestiges of its demonic taint drove the simple and peaceful bear-men to madness. Their aged and wizened leaders have been replaced by ruthless firebrands who lead the crazed furbolgs to prey upon the denizens of Ashenvale Forest. Where the furbolgs coexisted peacefully with the night elves for ages, with claw and fang they now seek to carve out their own home in the endless forest.[8]

Currently, many of these renegade furbolg tribes remain on the loose and are considered a grave threat to nearby settlements. Those few furbolg tribes who do remain uncorrupted have become withdrawn and suspicious, fearing that any outsider may bring corruption and madness to them as well.

Ceremonial beads, decorated with shells and feathers, are worn by a clan's chieftain.[9] Winterspring's furbolg prize the brilliant white feathers of the snowy owls for ritual purposes.[10]

The furbolg tribes worship the twin bear Ancients, Ursoc and Ursol, as gods.[12]

Polar furbolgs are white-furred furbolg who live in Northrend. They have shaman, trackers, and ursa warriors.[13]

Note: Although polar furbolgs appeared in Warcraft III, the term is not used in Wrath of the Lich King.

A furbolg in Warcraft III. 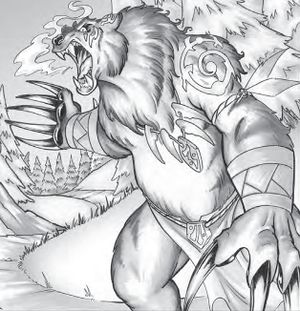 Furbolgs originated from Northrend. They lived on Azeroth before Titans came to the world. Their oral histories speak of the first time Titans stepped on the world and roamed the wilds. Furbolg may have descended from early Pandaren who settled up in Northrend, becoming more feral; or furbolg of Northrend may have discovered Pandaria and their culture became more contemplative.[14] Grizzly Hills is the homeland of the furbolg, and they outnumber every other race there combined. In central Grizzly Hills the only known furbolg city, Grizzlemaw, hold but half their number, the rest are gathered in clans and scattered throughout the region.[15]

Furbolgs corrupted by the Burning Legion are treated as a separate creature in the Manual of Monsters RPG book. 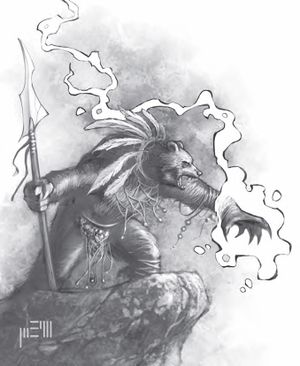 A furbolg shaman from the RPG. 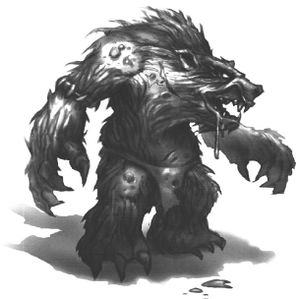 A corrupted furbolg from the RPG.

"Faced with the unexpected attacks by demons, undead and their own people, the furbolgs joined the fight, putting their generations of hunting experience to more violent purposes. Formidable warriors, they’ve always been. Formidable soldiers, well, that is a newer concept. Some furbolgs hired themselves as mercenaries to forces on both sides.

"After the war, emissaries from both the Alliance and the Horde (advised by the night elves and the tauren, I expect) approached the furbolgs and invited them into the affiliations, but they declined both. Perhaps it was their reluctance to choose between their friends, the night elves and the tauren. They do seem to be closer to the night elves, but I don’t think they want to claim themselves the enemies of the tauren simply by association. Perhaps they simply felt their problems had always been their own, and they would make their current problems their own as well. They are a proud folk.[16]

"When not attempting to heal their forests or their own people, furbolgs focus on hunting the Legion’s agents, who they blame mostly for their plight. You do not want to get between a furbolg and a demon. To keep life on track, more young furbolgs than ever are training to become shaman, seeing the holy men and women as the only adults who seem calm in these days of horror and uncertainty. With half of the population looking to pick up the spear (although they are deadly enough with their claws and bite) and the other half studying the magic of nature, the furbolgs are a people whose society is changing.

"One positive thing the war has done for the furbolgs is get them more acquainted with the world outside their forests. Formerly only the friends of the night elves and tauren, beings of the forest, and a self-contained people, now the furbolgs are watching the movements — political or otherwise — of the Alliance and Horde; traveling more; learning more about the world outside their forests; and widening their view of life as it applies to them in this new and harsher world."[17] ~ Attributed to Brann Bronzebeard

Furbolgs have their own language, Ursine, and a few speak Darnassian. Furbolgs sometimes learn the languages of their friends and, occasionally, their enemies, including, Common, Low Common, and even Taur-ahe.[18] Some furbolgs speak common and low common as primary languages.[19]

Independent. Furbolgs have long been friends of the night elves and regard the tauren with esteem. They are wary of all other races.[20] The furbolgs in Grizzlemaw are led by Baergar Blackpaw.

Furbolgs are tied to nature. Some accounts have them worshipping primitive godlike figures (they venerate the bear twins, Ursoc and Ursol),[21][22]) but primarily they revere nature and the spirits of the world.[20] The bear twins are the primary patrons of those who believe in a balance between nature and all living creatures.[23] The furbolg are the most fervent followers of the bear twins in the present day, following in their magical tradition and carving their fortress, Timbermaw Hold, in the form of a gigantic, growling bear head.[24] The Hols is the shrine to the Ancients Ursoc and Ursol.[25] Furbolgs try to mimic the ales made by Ursoc,[26] Furbolg shamans often bring Amity wine to peace talks and important discussions.[27]

Furbolg leaders are shaman or druids — which furbolgs usually also call shaman, making little distinction between the two practices. Furbolg priests are unheard of; only those who break far from furbolg society would follow the path of a deity or philosophy. Ursa totemics follow the paths of the bear twins.[20][22]

Furbolg names tend to be simple and denote important characteristics of the individual.

Furbolgs resemble bears with a few humanoid characteristics — bipedal gait, dexterous hands, and the ability to speak. They dress in loose loincloths or togas when they wear anything at all. Fur color normally ranges from light brown to black, and white furbolgs from Northrend are called polar furbolgs. Fur color also denotes status in the tribe: shaman have gray fur, and black fur marks the most powerful furbolg fighters. Furbolgs are big and strong, averaging 7 to 10 feet in height and 3 feet in width. Many furbolgs continue to grow even after they reach maturity, adding layers of muscle. Furbolgs weigh 300 to 400 pounds on average, though some reach 500 pounds.[20]

Most furbolg tribes live in isolated villages in Ashenvale Forest. A few live in other wilderness areas on Kalimdor. Grizzlemaw, in the Grizzly Hills region in Northrend, is by some accounts the center of furbolg civilization. Furbolgs often place totems around their territory.[20]

Furbolgs are probably loosely based on the Fir Bolg of Irish mythology. The Fir Bolg were a pre-Celtic race who inhabited Ireland millennia ago; as with most such beings, it is unclear whether they were human, near-human, or something else entirely. The Fir Bolg were forced out of Ireland by the Tuatha de Danaan, who are vaguely similar to elves.

More specifically, "furbolg" is likely a pun on "firbolg", a race of giants in the Dungeons & Dragons role-playing game that were inspired by the aforementioned Fir Bolg.