[Elemental Fury]. For the quest, see

Furies is the name for all elementals on Draenor, all of whom try to keep the world in balance.[1] Furies appear to be unique to Draenor. It may be something about the primal nature of the planet.[2] After the destruction of Draenor, many furies disappeared, but they are still plentiful on the alternate Draenor. There, the elements live in purity upon the Elemental Plateau.[3] This purity is maintained through the Cycle of Rebirth. Impurities are accumulated in the elemental body over time, and when enough contamination has taken place, an elemental will become unstable and in some cases volatile. When the Elemental Plateau becomes unstable, the cycle of rebirth must begin. A part of the rebirth is pure, living essence which can be found atop the Elemental Plateau, as well as in the body of an elemental spirit.[4]

When the Elemental Plateau grows unstable, such as when the alternate Gordawg was captured and enslaved by the pale orcs, the elemental spirits begin to devolve and mutate into elemental conglomerates such as slag elementals.[3]

There are many similarities between the elemental spirits of Draenor and their counterparts on Azeroth, but also many differences that Alliance or Horde shaman will be forced to adapt to. Whereas the elements of Azeroth are in constant conflict, the elements of Draenor strive for balance within themselves. This is especially evident in the Throne of Elements in Nagrand, where the greatest elemental furies of Draenor have convened peacefully since the dawn of the world. Be warned, however: if the chaos of war on Draenor throws the elements out of balance, they may lash out at each other... and anyone caught between them.[6]

Blacksmiths know that furies can be harvested for the best flux.[7]

The furies as seen in Harbingers.

Despite the destruction of Draenor, some furies remain in Outland. Many are found in Nagrand. Four powerful furies representing the four elements are located at the Throne of the Elements near Garadar. The Earthen Ring placed members there to make certain the furies wouldn't be bothered by trivialities; that only those in need of their wisdom or sincere in offering aid could speak with them. But this was just a courtesy, as the furies are imposing and can handle themselves.[8]

In the Throne of the Elements, the members of the Earthen Ring collaborate with the Furies of Outland to bring peace to the restless elemental spirits of Nagrand. Elementalist Lo'ap, under the guidance of Watoosun of the Water, instructs adventurers to kill the destructive Lake Spirits nearby and aids them with securing Incineratus' blessing.[9] With the fiery essence of Incineratus himself granted to the adventurers, Lo'ap tasked his agents to set fire to Windyreed Village, whose inhabitants had agitated the water spirits in their efforts to create a marshland in Nagrand.[10] Meanwhile, Watoosun cleansed the water spirits of their corruption; but in doing so, created a twisted spirit essence. Lo'ap sent adventurers to purge Watoosun's Polluted Essence and its offspring, the Lake Surgers.[11]

Gordawg also directs adventurers to kill tainted earth elementals and destroying the one responsible for their corruption: Gurok the Usurper.[12][13] Elementalist Morgh also sent adventurers to slay Murkblood Putrifiers, who have been using dark shamanism to control air spirits.[14]

The furies in Shadowmoon Valley were corrupted or enraged when Gul'dan shattered the land and severed the orcs' ties with the elements. The Earthen Ring captured the souls of furies in order to commune with them and find a way to heal the land. They revealed that Cyrukh the Firelord was awakened and driven insane by the shattering, throwing the elements into turmoil. In order to redeem the elements, adventurers reconstructed Gul'dan's Cipher of Damnation to summon Cyrukh and defeat him.[15]

Aggra brought Go'el to meet the four furies at the Throne of the Elements. He asked them to help him understand what was causing Azeroth's elemental spirits to suffer. Kalandrios was uninterested in the plight of Air in a foreign world while his own essences suffered in Outland. Incineratus was also more troubled by the plight of his own, but still regretted being unable to help Go'el without some essence of Azeroth's Fire. He instead gifted Go'el with the fire of passion to do what was needed. Aborius wished that he could help Go'el or impart a gift like Incineratus, but was only able to show compassion and provide words of encouragement. Gordawg also couldn't provide insight into Azeroth's spirits until Go'el presented a stone from Azeroth. Gordawg ate the stone and experienced its fear of being broken and shattered, likening it to the fear he tasted right before Draenor was destroyed.[16] 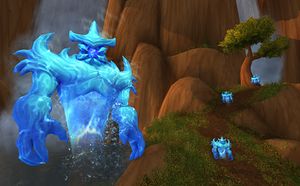 A group of water furies.

During a ritual, Drek'Thar heard the cry of a fury. Beaten, half consumed, and shattered by ancient magics, the fury was the prisoner of the magnaron Kron, the Flame Breaker. It had been fragmented, its pieces scattered on the wind or consumed by scavengers.[17] In order to free the fury, Drek'thar became one with Exurotus, and started on the path of becoming this world's greatest shaman.[18]

An earth fury, Kronus, is later empowered by Archdruid Atomik in order to assist the Horde in battle in Ashran.

Gordawg and a large number of furies were captured by the pale orcs and enslaved. The plateau grew unstable, causing the elemental spirits there to devolve and mutate. Its imbalance created Magmire, a slag elemental who was both fire and earth elemental. So long as Gordawg was absent from the throne, the imbalance in the elements would worsen.[3] Incineratus tried to maintain the balance on the Elemental Plateau in slaying the corrupted Guardians of the Plateau[19] while Kalandrios ordered the death of the now-corrupted Gordawg.[20]

Elemental furies also exist in Highmountain on the Broken Isles in Azeroth.[23] They mostly amass in the areas around Thunder Totem. Crystal furies are used by the drogbar.[24] Water furies also appear.