Judging by his location, Fury is presumed to be the steed of Salanar the Horseman. However, it may also belong to Highlord Darion Mograine (see below). 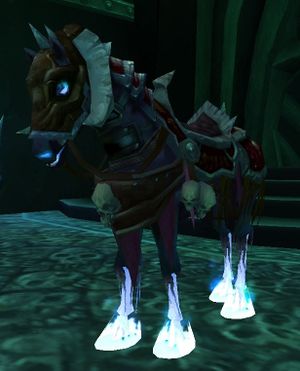 Fury also appears at Light's Hammer in Icecrown Citadel, standing behind Highlord Mograine; like other NPCs in the room, the horse will charge to attack enemies in range, like the Damned attacking Light's Hammer. It will also occasionally join players in attacking mobs in the next room, such as the awakened Deathbound Wards.

Confusion: Who is Fury's rider?

Fury's presence in Icecrown Citadel has led to some confusion, as it was implied that Iydallus, who appears in the Argent Vanguard, was Mograine's deathcharger, and that Fury belonged to Salanar. If Fury was the steed of Salanar, it is unclear how Mograine was able to obtain it. However, if Fury was in fact Mograine's steed, it brings Iydallus' status into question. It's possible that Iydallus was simply used by Mograine in his guise as the Ebon Watcher, and that Fury is in fact his "normal" steed, however, Iydallus may have been actually Fury, as the Ebon Watcher was Darion Mograine. There has been no official explanation behind this inconsistency, so any reasoning is speculative at best. It is also possible that Fury was accedentally placed as Darion's horse in Icecrown Citadel as an oversight by developers. It is also possible that Mograine has two horses, one of which may or may not have been Salanar's.