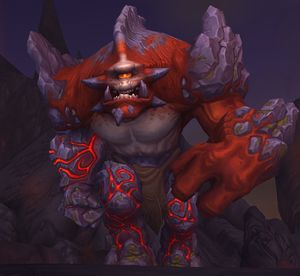 The moment I begin the ritual to free Exurotus it is sure to draw Kron to us.

It would normally take an army of seasoned warriors to defeat a magnaron. Today, there is only the three of us.

Look for my fire totem upon the battlefield. I will try to gain what boons I can from Exurotus. Step near the totems and become one with the Fury.

You will also receive: 12

With Kron defeated I can finish breaching the magic that holds Exurotus, but I may already be too late. So much of the fury has already been expended and drained by the magnaron and goren.

I fear we may have only bought this spirit a peaceful death.

Draka says: Kron is coming! Champion, with me.

Kron is a level 93 elite magnaron with 1.3 million health and the following abilities:

During the fight, Farseer Drek'Thar will launch a totem within 15 yards of the player:

Standing in the totem's area of effect adds a stacking buff, increasing damage dealt by 600% each stack!

At 50%, Thrall runs in to help alongside two frostwolves, Wise-ear and Whitefang:

Thrall yells: Champion! I heard Drek'Thar's call. I am with you!

Kron says: You do not understand... You cannot know...

[100] Ours is the Fury, but a script event plays out on complete: