For his biography, see G'huun. 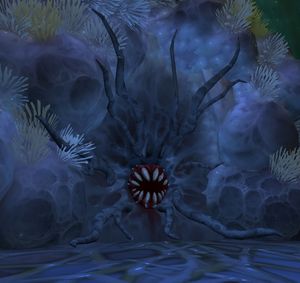 G'huun is the final boss of the Uldir raid. After facing the other horrors of Uldir, the raid faces the root of the corruption that seeks to devour Zandalar, and potentially, all of Azeroth.

This fight consists of 3 phases and revolves around using the titan-made Reorigination Drive to wipe out adds and severely damage G'huun at critical junctures.

In Uldir, the titans had hoped to find a solution to the Old Gods. But when they experimented upon the Old Gods' unending, ravenous need to corrupt, they unexpectedly created a perfect avatar of that desire. G'huun is nothing but rot, pestilence, and decay, the ultimate parasite who cannot stop itself from consuming its host until it is gone. 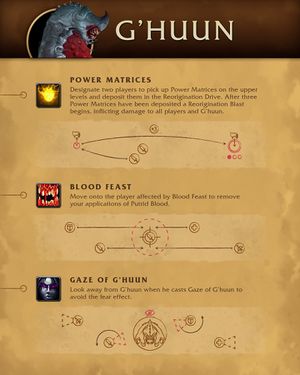 Overview of tactics for the G'huun fight.

Phase One: My Minions are Endless

Same as phase one

Phase Three: Your Destruction is Assured!

This fight requires 2 tanks. Healing will be light in phase 1, but the need for heavy healing will grow when G'huun himself joins the fight.

[Bloodlust] effects should be saved for the final phase. While any DPS composition works, high-mobility classes like monks, warriors, and demon hunters, along with warlocks, can make Phase 1 far easier.

During this phase, G'huun will stay inside the wall and constantly heal itself, making damaging it pointless. All it will do is cast Explosive Corruption. This will hit several players with a debuff that, after 4 seconds, will explode and create both slime on the ground and blight-orbs flying in different directions. Players should try to drop this debuff as close to the walls as possible and away from high-traffic areas, as the slime both hurts and slows down players.

Most of the raid will be in the center arena battling G'huun's forces at any given time. Cyclopean Terrors are eye tentacles and simply cast Mind Flay on players with slowly increasing damage and should be focused down first. The Dark Young is a giant creature that hits the tank hard and casts Dark Bargain. This spell causes a circle to appear on the ground, and when players OR enemies are within the circle when the mob finishes casting, they will gain a strong DPS and Healing increase, but increase damage taken. Tanks should try to make it so the Dark Bargain is cast on the Cyclopean Terrors to get them down faster. DPS and Healers can also take a stack, but should be mindful that, if they gain 2 stacks, they will get charmed and need to be taken down.

This phase will go on until the raid uses the Power Matrix orbs that spawn on the sides of the room to create a Reorigination Blast, killing all the adds and starting Phase 2. To trigger it, players must run a total three orbs from the spawn location (small altars on the left and right side of the arena) to the Reorigination Drive at the other end of the hall. The orb will spawn on the left-hand side of the arena, then the right, then the left again. Along the hall, there are cysts that cause blighted ground that will slow you down and cause negligible damage. As previously said, classes with high mobility can essentailly solo this segment with the help of a warlock's

[Demonic Gateway]. A monk with

[Celerity], a warrior with

[Warbringer] (charging the cysts), or a demon hunter are all great options. If these are not available, 3 players must move and throw the orb between each other due to the orb slowing down and eventually rooting the player holding it. If a player throws the orb and it does not land on another player, it will shatter against the ground uselessly and you will have to start over. The reason to bring 3 players is that, if a player has held an orb within 5 minutes, they will not be able to hold one again and the orb will shatter when thrown. Divide players into appropriately-sized groups before hand and this phase should end with minimal difficulty once the mechanics are understood.

As the Reorigination Blast fires, it will stun and wipe out all adds over the course of 24-seconds. Stack and heal through the damage. After the adds have died, G'huun itself will emerge and attack. The tank-swap mechanic is Growing Corruption, causing G'huun to deal ever-increasing damage to the tank he is currently targeting, and can only be reset when he hits a different target, similar to Imperator Mar'gok. He will also be casting Explosive Corruption on his current tank. Ideally, tanks should watch their DBM timers and time their taunts so that the tank with the stacks takes the Explosive Corruption and then is able to run out to keep the Blighted Ground against the wall.

During this phase, the raid can stack up to better heal-off the damage from G'huun's Wave of Corruption. This causes all players to take unavoidable damage and also causes them to gain stacks of Putrid Blood, causing damage over time. The only way to dispel this stacking debuff is to stack on the player with Blood Feast, a large red circle that roots a single player. This will spawn a Gibbering Horror add which must be picked up immediately. This add will hit the tank and cast Mind-Numbing Chatter to interrupt anyone currently casting. Healers must pay attention to DBM timers for this cast as damage during this phase is very high from the Waves of Corruption. Each stack of Blood Feast cleansed will empower the add by 5%. Cleansing stacks frequently, or not standing on the Blood Feast, will lead to smaller and more frequent adds, while waiting for several Blood Feasts to pass will lead to fewer and stronger adds.

You can only activate ONE more Reorigination Blast this phase and you typically want to use it to transition cleanly into Phase 3 by using it to kill the currently-active add. You can be done multiple ways, such as only summoning 2 big adds, activating Reorigination Blast, and cleaving them both down while killing the boss. Use the blast to get to 25% and Phase 3 will begin.

At 25%, the Reorigination Drives will no longer function, leaving the raid to finish off G'huun on their own. During this phase, G'huun will cause the roof to collapse, causing even greater raid-wide damage over time. He will also gain Gaze of G'huun, causing anyone currently facing towards it to run away in fear for 6 seconds. Simply turn away to do so. He also stops casting Blood Feast, meaning there is no way to cleanse Putrid Blood stacks. Try to save healing cooldowns for this phase as it will get very damage-heavy. The raid should not stack due to the collapsing roof hurting and knocking you back from the impact-site. Thus, the raid should try to spread out with the healers in the center of the room, better able to reach everyone. As Putrid Blood stacks get higher and Explosive Corruption continues hitting non-tank players, the fight becomes a brutal race to see who dies first: The raid or the boss. Use your Bloodlust, keep the Explosive Corruptions near the walls, and chain your healing cooldowns smartly, and your raid should be victorious with high dps.

Intro
Princess Talanji says: De Reorigination Drive is ready. Now, it is left to us to end G'huun's plague once and for all.
G'huun whispers: The seals are broken. The end is here. Come, and be the first to accept my gift.
G'huun whispers: You will carry my pestilence, and a vast, bubbling, putrid cyst will cover the world.

Your screams will echo forever!