From Wowpedia
(Redirected from G.E.A.R)
Jump to: navigation, search 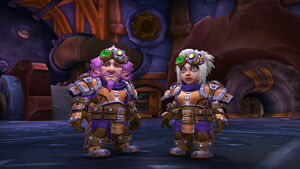 The Gnomish Elite Aerial Rangers (G.E.A.R.) are an elite gnomish aerial task force[1] formed during the Fourth War, representing the best that Gnomeregan has to offer.[2]

Their uniform is the Heritage of Gnomeregan.[3]

During the Fourth War, the leaders of the Alliance made a request for Gnomeregan's might in the war[4] and agreed to fund an elite task force. A gnome adventurer—subsequently referred to as "Commander"—was chosen to lead the unit's test team, which was assembled in New Tinkertown by Captain Tread Sparknozzle.[1] Consisting of Herk Winklespring, Emaedi Autoblast, and Fizzi Tinkerbow, this team represented the brightest paragons of gnomanity. No aerial unit would be complete without the latest in flying machine technology, so Tread sent the Commander into Gnomeregan in order to retrieve an experimental engine needed to power the unit's prototype bomber planes.[2]

While the Commander was delving through Gnomeregan, New Tinkertown received a distress signal from the Fizzcrank Airstrip in the Borean Tundra. Sparknozzle sent G.E.A.R. along with the bombers to investigate the situation.[5] Upon arriving, the rangers found the airstrip under attack from an army of Ironbound troggs that had emerged from the north. The Commander cleared out the troggs on the ground with the help of one of the bomber's prototype guns[6] before taking out the trogg leader, Krugg the Smart.[7] A communication device carried by Krugg revealed that the troggs were under the command of the leper gnome Telzo Sparkspanner, a former assistant of Sicco Thermaplugg[8] who planned to use his trogg army to decimate all of gnomanity.[9]

Tinkerbow tracked Sparkspanner's signal to the Storm Peaks, but the planes were forced to land on the Foot Steppes when the signal tracker started going haywire.[9] The Commander took the opportunity to kill some more Ironbound while Tinkerbow recalibrated the device, after which the rangers relocated to a spot on the Terrace of the Makers closer to the signal's source[10] and confirmed that Telzo was in the Halls of Stone. They also found that the leper gnome had taken control of Ulduar's exterior defenses and rewired them to see G.E.A.R. as intruders. Winklespring and the Commander took to the skies in one of the bomber planes and used its newly-installed guns to decimate Sparkspanner's army of troggs and reprogrammed constructs.[11] The rangers then headed into the Halls of Stone to confront Sparkspanner himself. At the Forge of Wills, the rangers battled Telzo and his mech—the Smasher X900—and managed to kill him,[12] thereby saving gnomanity and Azeroth from a threat they didn't even know existed. The Commander returned to New Tinkertown to report to Captain Sparknozzle, who congratulated the rangers on their successful mission, stated that the Alliance would surely call upon the unit in the future, and finally gave the Commander a G.E.A.R. uniform.[3]