For the character from the main universe, see Ga'nar.

Ga'nar is the son of Geyah and Garad and the older brother of Durotan. Ga'nar is a warrior and more reckless and battle-hungry than Durotan. Over the course of the Frostfire Ridge storyline, he learns more of honor and temperance from both his brother and the Frostwolves' new Horde allies. Ga'nar eventually dies to save his clan and allies during the Battle of Thunder Pass.

Before the formation of the Iron Horde, he fought alongside his father against the Laughing Skull Orcs.[2] When the Iron Horde was formed, Chieftain Garad and his son Ga'nar disappeared in the frozen wastes of the Frostfire Ridge. They were attacked by the Thunderlord clan led by the Iron Wolf.[3] Garad was killed and Ga'nar left for dead. The ogres from Bladespire then delivered him to the Iron Horde.[4] 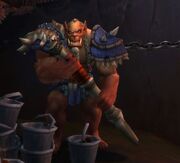 Ga'nar during the Assault on the Dark Portal.

When the Horde and Alliance forces go through the Dark Portal into the Tanaan Jungle, Drek'Thar sensed Ga'nar and sent adventurers to release him. He was found chained to an outhouse. After being freed by adventurers he joins the rest of the Alliance and Horde forces in fighting the Iron Horde and escaping from the Tanaan Jungle. When the Dark Portal is destroyed, he runs to the boats only to challenge Warchief Hellscream to duel. Drek'Thar however pushed him back. He joins the Horde adventurers on the boat to Frostfire Ridge and navigates the boat.

Ga'nar joins up with his brother Durotan and shortly after the Horde establishes an outpost, Ga'nar is found riding mounted with a retinue of Frostwolf soldiers towards Bladespire Citadel, despite Durotan's wishes to be more cautious. With the help of the Horde, the Frostwolf Orcs take the Bladespire Citadel and kill its ogre-king. After that he disputed with his brother and left to march his forces onward to strike against the Thunderlord clan in Daggermaw Ravine. After eventually being successful at killing the three sons of the Iron Wolf, with the help of Horde adventurers, he returns to the Horde garrison to meet up with Durotan. There, fuelled by his recent success, he attempts to take over the role of chieftain by declaring a Mak'gora. Durotan drops his axe, exclaiming that Ga'nar would have to kill his own brother in cold blood if he wishes to become the Frostwolf chieftain. After hesitating for a few moments, Ga'nar bows down and declares his loyalty once more to Durotan.

Ga'nar, Durotan, and the Horde commander face off with the Iron Wolf in where it is revealed that the Iron Wolf is, in fact, Ga'nar and Durotan's eldest brother Fenris who abandoned the Frostwolf Clan, believing that they should subjugate beasts instead of bonding with them.[5] It is Fenris is slain, but the Iron Horde still approaches from Thunder Pass to the east. Ga'nar joins his clan in defending the pass in The Battle of Thunder Pass. The Frostwolves defend the pass alongside their Horde allies, but the assault rapidly becomes overwhelming. As the Horde is pushed back and Drek'Thar channels a massive lightning spell to seal the pass, Ga'nar stays behind to buy the farseer enough time to complete the spell, having fully acknowledged that Durotan has become a better leader than he ever could have. The lone Frostwolf warrior charges into the fray, slaying numerous enemies as Drek'thar completes the spell and collapses the pass. About to die, Ga'nar lets loose a mighty "LOK'TAR!" before dying under the rubble, having died a hero's death.[6]

After the battle, his wolf companion Snowfury tries to dig at the rubble sensing his master.

Upon the elemental blessing, the spirit of Ga'nar appeared in front of the Horde commander. Though he was ferocious and angry in life, he has now found peace.

Frostfire Ridge
The Bladespire ogres threw me into that hellhole. I'll notch my axe with their skull until vengeance is mine!
Honored brothers and sisters! Today we achieved what Durotan would not even dare to try.
Make no mistake. We are at war. And we need a Warchief!
Those of you bold enough to stand with me - come! We will show the world the might of the Frostwolves!

<Ga'nar's spirit - so angry and ferocious in life - has at last found peace. He speaks to you with warmth.>