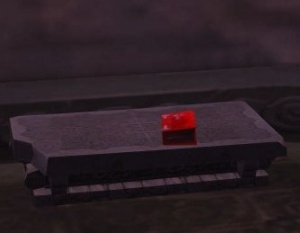 Ga'trul's Logs is a logbook containing the events of Ga'trul and fleet. It's found in the Twinspire Keep in the Jade Forest.

I have assumed command of the fleet after Krug fell during battle with the Alliance flagship. He died with great honor, and did not choke his last breath until he learned of the Alliance defeat.

The battle has taken a heavy toll on the fleet, but one by one our scattered vessels are arriving victoriously to the shores of this strange land. It is not on any of our charts.

I have tasked our peons with the construction of a safe harbor from which we can make repairs.

A fat race of bear-creatures calls this land home. They are the "pandaren." Dalgan tells me that a pandaren was present at the founding of Orgrimmar, but he is always full of grog and lies.

These pandaren do not appear to be a threat, but they have supplies which will be useful to our campaign: food, wood, stone... If this indicates the wealth of this new land, then it will make a fine prize for the Horde.

Scouts have discovered ancient, unclaimed ruins backed up against the mountains that overlook the cove. It is an ideal stronghold. I do not anticipate reinforcements from Orgrimmar for several weeks. For this reason I have opened the ancient texts and commanded our warlocks to begin summoning demonic forces to bolster our army. This show of force will no doubt intimidate the pandaren into aiding our cause.

An entire battalion of Forsaken forces swam ashore in the dead of night, survivors from the battle at sea. It seems they are impossible to drown. The stench is overwhelming, but they may have their uses.

By now news of our victory at sea and discovery of this new land will have reached Orgrimmar. No doubt reinforcements are on the way. Our lookouts have spotted Alliance scout ships snooping around the debris field marking the location of the sea battle - they will likely come looking for their own. We will be ready.

The pandaren have proven to be useless to our cause. They are not interested in the goods we have for trade: they turned up their black noses at even the most powerful of fel artifacts. My troops will need food, we cannot eat the corpses of drowned sailors like the disgusting undead. Pandaren arrogance is making my blood boil. I cannot seem to escape my rage.

The Alliance is coming. I can feel it. I do not know why - I have an overpowering sense of unease and dread. Something about this land is eating away at me. I have ordered my warlocks to summon a demonic observer so that we can watch the shores. They insist we will not be able to control it. I am surrounded by cowards in my time of need. Why do I feel such doubt? I swear my very skin is losing color.

The pandaren sent an envoy to ask us to stop cutting down their trees. I told him that his people should've listened to my request for more wood, and sent him back with scars. Releasing my anger felt good.

The Alliance is coming, and my time grows short. I must find a way to make the pandaren listen. Perhaps if I took something they valued, that would both show our strength and give us something to bargain with? Bellandra of the Forsaken had the interesting notion of taking their cubs.

Alliance gunship spotted south of our position. I have ordered our grunts to the guns. I will see to the defense of Garrosh'ar Point personally.

I feel a great darkness inside me. The spilling of Alliance blood should bring relief. I am ready.