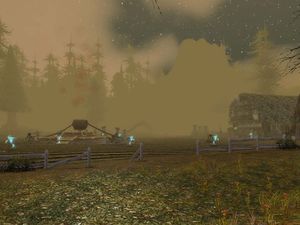 The plague cauldron at Gahrron's Withering

Gahrron's Withering is an abandoned farmstead located at the eastern end of the Western Plaguelands. Formerly known as Gahrron's Quickening,[1] the farm has been taken over by the Scourge. They have placed a large cauldron in the middle of the field which constantly spews disease-filled vapors into the air. The cauldron is guarded by Cauldron Lord Soulwrath and other Scourge officers. Haunting Visions and many Wailing Deaths and Hungering Wraiths. Gahrron's Withering is a popular place for grinding Argent Dawn reputation, as the quest involving the Scourge Cauldron located here provides the best reputation of the four Cauldron quests.

Gahrron's Withering is the only farm of the four Target: Plague Cauldron quests given by High Priestess MacDonnell at Chillwind Camp that does not have additional quest givers in the area. It was once owned by Del Gahrron before the Scourge arrived. At the farm, the Alliance forces killed the corrupted Joseph Redpath. His shield remained there.[2]

Unlike the other three farmsteads, Gahrron's Withering is still very much in Scourge control with Cauldron Lord Soulwrath still being located here.