For her appearance during the Elemental Unrest, see Kai'ju Gahz'rilla.

Gahz'rilla is a level 48 elite hydra boss summoned in Zul'Farrak. 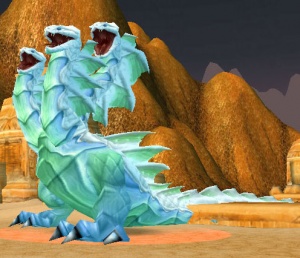 Long ago, when trolls used to occupy the land of Tanaris, they built up Zul'Farrak, the sand troll city in Tanaris, with a sacred pool. From that pool the trolls summoned the huge hydra Gahz'rilla, so fierce that even her scales crackle with energy. The trolls worshiped her as a deity, but the summoning of Gahz'rilla is a well-kept secret of the trolls. Gahz'rilla is said to be a demigod.[3][4][5]

Large amounts of ornaments have been modeled after the beast Gahz'rilla. These ornaments are called "Gahz'ridian", after the hydra demigod. Within Zul'Farrak, the legendary hydra is a common motif in architecture and ornamentation.[6]

The Sandfury tried to strengthen Gahz'rilla to attack Stormwind. Hydromancer Kulratha attempted to send her into Stormwind and Thunder Bluff, however heroes led by Varian Wrynn and Cairne Bloodhoof invaded Zul'Farrak, slain Kulratha as well as Gahz'rilla. It is unknown what happened to the Sandfury after her defeat, although she did appear to have small versions of her swimming in her pool of water.

Legend has it that Gahz'rilla was an adored pet of the Old Gods, or even a demigod in her own right. Whatever the truth is, the Sandfury trolls have worshiped this monstrous hydra for thousands of years. Ever wary of the beast's icy wrath, the trolls will only rouse Gahz'rilla when they have plentiful sacrifices to sate the ravenous creature's appetite.

Prior to patch 3.0.8, Gahz'rilla had to be summoned. The process of summoning Gahz'rilla was written on Ancient Tablets that dropped as vendor trash in the instance.

The process involved traveling to The Hinterlands to acquire the

Qiaga the Keeper who resides at the Altar of Zul. To transform the Sacred Mallet into the [Mallet of Zul'Farrak], one had to bring it to the very top of the Altar of Jintha'Alor.

With the Mallet of Zul'Farrak, Gahz'rilla's gong could then be rung. However, it was (and still is) wise to clear the area first, as Gahz'rilla can knock back players.

As of patch 3.0.8, Gahz'rilla no longer needs to be summoned. She is simply present at the location he used to appear upon being summoned. The Mallet of Zul'Farrak has since been turned into a rare weapon with fairly decent stats and rare skin.

All mobs around the pool should be cleared first, as Gahz'rilla will occasionally launch players through the air which may cause them to land in a group of mobs. Gahz'rilla does not automatically aggro to the players when summoned, and knockback damage can be avoided by landing in the pool of water where she is summoned.