The Galak are a tribe[citation needed] [1] of centaur that inhabit Thousand Needles. Their founding leader, or Khan, was Khan Veng, the fifth of the alleged offspring of Zaetar and Princess Theradras. The clan is currently ruled by no definitive Khan. The Galak hold no alliance with their brother tribes, but have been known to act both hostile and passive towards members of the Alliance and Horde. 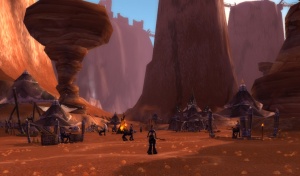 Little is truly known about the Galak, apart from the name of their founding Khan. While brother tribes like the Magram and Gelkis remained in Desolace when the centaur split into five tribes, the Galak at some point migrated into the canyons of Thousand Needles.

The reason for this has not been verified. However, several causes are likely. It is possible that both Veng and Kolk held a temporary alliance between their tribes and migrated together into the Barrens. Only later would the Galak break away and make their way into Thousand Needles. Were this the case, then it is possible the Galak played the aggressor against the nomadic tauren prior to the founding of Thunder Bluff during the Third War. This theory would then account for the former Galak presence in Mulgore.

Prior to the Cataclysm, the Galak maintained both a village and a camp in the canyon of Thousand Needles, Splithoof Crag and Camp E'thok. Splithoof was the larger of the two, housing much of the tribe’s population as well as their stronghold, Splithoof Hold. The Galak guarded one of the few remaining artifacts dating to the time of the centaur’s creation within their stronghold. The artifact is guarded both by physical strength and a magical flame which engulfed it. The only known way to douse this flame is with the water of a Night elf moonwell.

Camp E'thok was located in the northern portion of the canyon. With a Horde outpost nearby, the Galak were able to send assaults against caravans and traveling merchants. Further settlements were rumored to be found on the Mulgore plains, and sightings of Galak scouts were reported. 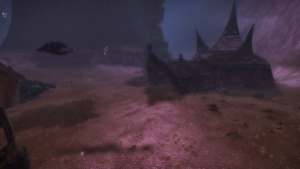 Camp E'thok, flooded by the Cataclysm.

After the Cataclysm, the Galak tribe has lost its prior settlements and have relocated to the Splithoof Heights, where two Khans lord over the tribe. During the questing experience there it is revealed that the Galak have sworn allegiance to Whrrrl, one of the lords of the Skywall.

Some time after the Cataclysm, the Galak and other clans of centaur joined under the new High Khan.

They can speak Low Common.