Not to be confused with Grakkarond.

Galakrond was a massive proto-dragon,[3] who is known as the "progenitor of dragonkind".[4] He was a threat which five proto-dragons of varying colors united against.[5] It is said that from him the Titans created the Aspects,[4] but this is a rumor the Aspects actively encouraged so as to keep the truth about Galakrond a secret from the dragonflights.[6]

His size alone was greater than all of the Aspects combined,[4] large enough that the only possible being Galakrond could be compared to was himself. His roar could be heard from miles around, and the flap of his wings generated powerful wind.[7] As he continued to consume the life-energies of his fellow proto-dragons, Galakrond grew hideous mutations all over his body (such as limbs and even eyes) and his skin started to decay, almost as if he had become an undead like his victims.[8] Galakrond was not always this large and he used to have a smoother, more streamlined appearance.[9] His mutations were caused by cannibalizing on other proto-dragons, and as a by-product of his absorption of the proto-dragons' life essence his victims came back as undead, called the not-living.

Galakrond who once hunted with his fellow proto-dragons and was seen as benevolent suddenly changed and became terror that caused the other proto-dragons in prehistoric Azeroth to fear him. While the proto-dragons did not know what caused the change in Galakrond, Watcher Tyr vague wordings implies that he is at fault for Galakrond's actions and mutations as things did not go according to Tyr's plan.

On a day when dozens gathered to hunt, Galakrond appeared and took their prey, terrifying them all. The blue-white proto-dragon Malygos was curious as to why Galakrond would hunt in that area when he never had before, to which his new friend Neltharion responded that there was more food. Malygos, however, was quick to point out that the food was their food. In addition, Galakrond began to devour dozens of other proto-dragons, which was unthinkable to the others as they didn't practice cannibalism. However, the horror did not end there as it was revealed that those cannibalized by Galakrond rose as undead, called the Not-living, enslaved to his will.

At Galakrond's command, the not-living hunted their living counterparts and infected those they bit. The proto-dragon Coros sought to emulate Galakrond believing that Galakrond would not devour those like him. To this end Coros would meet with Galakrond in secret and inform him of the time and place that Talonixa, the chosen alpha of the living proto-dragons, decided that the proto-dragon army would venture forth and attack Galakrond. Seemingly pleased with this information and the thought of the feast that he would have Galakrond flew off, seemingly sparing Coros and his fellow cohorts. However, as Coros and his band took off to the sky Galakrond returned and quickly devoured them all.

Despite Talonixa learning of Coros's betrayal and striking at a different place and time Galakrond was able to use not-living forces to lure the proto-dragon to him. Galakrond erupted from the ground when the army was in position and swiftly shattered it. After killing Talonixa, Galakrond was unable to devour the fast of the army due to the actions of Malygos, Nozdormu, and Neltharion. As Malygos broke off to find Ysera and Alexstrasza, Galakrond ended engaging in battle against the future aspects only to be driven off by Tyr after being stunned by his hammer.

An unknown time later, Tyr met with the five proto-dragons, informing them that Galakrond was sleeping in a mountain range to the north and that it was the perfect time to attack. After eating and gathering their strength Tyr and the others met up near Galakrond's slumbering place and would engage the behemoth in battle. During the course of the battle, Tyr's hammer and his Spark of Tyr were knocked free from his person and as he reached out to grab the Spark, Galakrond's massive maw came within range and ended claiming both the artifact and Tyr's hand. Pleased by his victory and being further mutated, Galakrond did not even notice when his enemies had left the battle.

After regaining his senses Galakrond found himself unable to find prey as the living had become adept at hiding. With his hunger ever-growing Galakrond, in a move that stunned and surprised the future aspects, began to devour his own not-living as they were the only thing that would not hide from him. Despite his hunger, Galakrond was able to show restraint by keeping enough not-living to serve as a scouting force to hunt down his preferred prey: the living proto-dragons.

Galakrond and his remaining not-living forces would eventually be attacked by the future aspects, in what would become known as the Dragonblight. During the battle, Malygos would be able to lodge a boulder into Galakrond's throat; an action which not only saw Galakrond to focus his attention on dislodging it, instead of combating the others, but also forced him to release his hold on the remaining not-living who then began to attack one another. Despite his best efforts, the actions of Malygos's ice breaths would force the boulder to remain in the place and the boulder would ultimately be lodged further down his throat when Neltharion blasted a not-living into it, causing Galakrond to ultimately choke to death.

Wanting to keep the truth about Galakrond a secret in order to prevent others from following in his path, the aspects encouraged the rumor that the Titans created them from Galakrond.[10]

More than 10,000 years later a taunka named Buniq was trying to prove herself worthy to her mate Akiak. Akiak along with Trag Highmountain found her corpse near the remains of Galakrond in Dragonblight. A bone fragment from his corpse was retrieved by Trag. He could see its potential and took it with him.[3] 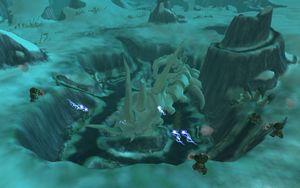 Some time afterwards, the Lich King put Grand Necrolord Antiok in charge of an effort to raise Galakrond into undeath. These plans were thwarted by adventurers who slew Antiok and ended his rituals.[11] When Deathwing attacked Wyrmrest Temple for the second time, Galakrond's boneyard was used by the Twilight's Hammer as an assault point against Thrall and his companions.

Following a meeting between the former aspects, Kalecgos discovered the Spark of Tyr--and later Tyr's hand--within Galakrond's skeleton. The artifact showed Kalecgos visions of the distant past, which caused him to learn the truth about Galakrond. As Kalec was rocked by these visions Jaina Proudmoore traveled to Galakrond's skeleton looking for a way to aid her love.

Both Kalec and Jaina encounter the ghost of the taunka Buniq in their exploration's of Galakrond's skeleton (Jaina theorized her to be Tyr in disguise). After using the artifact to remind the other former aspects of their duties, Kalec thought he saw Tyr standing at Galakrond's Rest.[10]

Dawn of the Aspects: Part III

Galakrond is the central antagonist of the Descent of Dragons expansion for Hearthstone, playing a similar role to C'Thun from Whispers of the Old Gods. Galakrond appears as five different hero cards for each class representing the League of E.V.I.L., and a new mechanic, Invoke, directly upgrades him into a more powerful form. The hero cards representing him are as follows:

When Galakrond started destroying the life essence of proto-dragons by consuming them, he underwent mutations. Eventually, he started to breathe a sickly green mist that Malygos described as "slow death" and reminded him "much too much of that 'breathed' by the not-living."[12][13] Those exposed to this mist became either lethargic as if their lives were slowly seeping out afterwards,[14] or violent[15]