Galen Trollbane was the ruler of the human kingdom of Stromgarde prior to the Cataclysm. He took leadership of Stromgarde following the ultimate demise of his father Thoras Trollbane and rejoined the Alliance. After his death at the hands of the Horde seeking Trol'kalar, he was resurrected on the orders of Sylvanas Windrunner and sought to obtain the sword for her. Around the time of the Burning Legion's third invasion, he declared himself king of a now undead-inhabited Stromgarde, but was ultimately slain by the Knights of the Ebon Blade.

Prince Galen Trollbane was the only heir to Stromgarde's throne, as the only son of King Thoras Trollbane, and was also the leader of the city's defenders.[4] At some point after the Invasion of Draenor, he murdered his own father.[5] Not long after the assassination of King Thoras, Stromgarde came under siege by forces of the Syndicate and the Boulderfist ogres. The Syndicate and the Boulderfist ogres won several victories against the weakened kingdom and occupied most of its territory, including part of the capital city.

Galen took the command of the forces of Stromgarde and desperately tried to retake the ruined kingdom. He personally took charge of guarding the Trollbane family crypt, which safeguarded several ancient artifacts. After recognizing the vastly changed circumstances since his father's death, he agreed to rejoin the Alliance.[6] 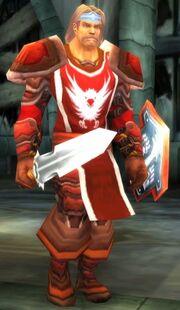 Galen when he was a human.

A Horde jungle troll named Zengu sought the sword Trol'kalar, known as a legendary bane of trolls and heirloom of the Trollbane family, so that the Darkspear tribe could use it against the trolls of Zul'Gurub. The sword had been sealed in Thoras Trollbane's tomb since his death and opening the tomb required several sigils that were guarded by Stromgarde's fiercest warriors. The last of these sigils was guarded by Galen Trollbane himself. He was slain near Thoradin's Wall by the Forsaken[3] who subsequently claimed the sword.[1]

Galen Trollbane was later resurrected by the Forsaken apothecaries under the orders of Sylvanas Windrunner, and seemingly pledged his allegiance to her.[7][4] Making camp at the aptly-named Galen's Fall, he learned from Dark Ranger Alina that Zengu was assassinated by Stromgarde troops when he attempted to leave Arathi and the sigils and sword retaken. Galen himself then tasked Horde adventurers with reclaiming Trol'kalar, constantly remarking that he was doing everything for Sylvanas.

With Trol'kalar in hand, he abandoned Sylvanas and the Forsaken and rallied his undead citizens and soldiers. He declared himself the king of the ruined kingdom of Stromgarde, which he intended to rule independently from the Alliance and the Horde.[8] He was soon targeted by the Ebon Blade death knights who wanted to raise his father as one of their Four Horsemen. Galen promised to open his father's tomb with Trol'kalar if the death knights cleared the last of the forest troll presence from Stromgarde, but turned against them because he didn't want to hand Stromgarde back to his father and to keep Thoras's murder a secret. Galen defended himself with Trol'kalar but was killed by the Deathlord of the Ebon Blade,[2] who then raised Thoras.[5] Thoras revealed to the Deathlord that he already knew that it was his son who had murdered him.

Following his resurrection as a Forsaken, Galen became even more somber and reserved. Galen briefly mourned the death of his former cavalry leader Lieutenant Valorcall, only to stop and state his former existence now means nothing to him.[9]

In Legion, Galen's true color is revealed. He is ambitious, selfish and tends to use others to get what he wants before double crossing them when he no longer needs them. He murdered his own father, possibly in order to hasten his ascension as king. When he lost portions of Stromgarde to the Syndicate, ogres, and forest trolls, he allied with the Alliance to regain the lost territories and hold off Forsaken intrusions. After his death and resurrection, he allied with the Forsaken and ordered attacks on his own countrymen and the Alliance. He claimed that he saw himself merely as an instrument of the Banshee Queen's will and sought to use Trol'kalar solely for her benefit.[7][10][11] When he finally gained Trol'kalar and Stromgarde, he broke off from the Forsaken and kept both for himself. When the Knights of the Ebon Blade wanted to retrieve Trol'kalar and his father, he tricked them into getting rid of the remaining forest troll infestation and once again tried to double cross them.

During his rule, Galen was a friendly and determined but also desperate lad, despite his hard-pressed effort to hold his city. The young man has a dark, brooding look about him. His eyes are sunken as if from a prolonged lack of sleep, and his skin is pale. He is dressed in expensive clothes with a silken cloak flowing behind him. He appears to be of noble blood and carries himself with sullen arrogance. A curved knife is sheathed at his belt.[12]

Galen still reels from the emotional shock of his father's assassination and has run himself ragged trying quickly to form patchwork alliances with other nobles. Not thinking clearly, Galen responds to any perceived insults recklessly, issuing immediate challenges to duel. If he becomes cornered in melee, Galen fights defensively until his bodyguards can come to his aid. Whenever Galen appears about to lose, he attempts to stop fighting, grudgingly issues an apology and offers some gold as compensation.[12]

The Dark Lady watch over you... 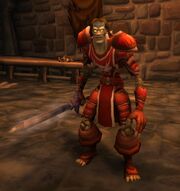