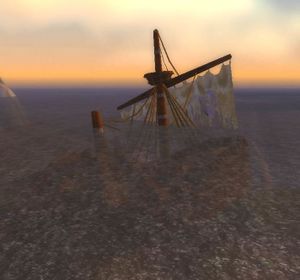 The Gallant on the coast of Desolace.

The Gallant, once captained by Ulysses Rackmore, now lies underwater in Slitherblade Shore near the shore of Desolace.

The Gallant was on course to Feathermoon Stronghold with a shipment of supplies, when they were attacked by Slitherblade naga along the way. In fear of losing his most precious belongings, Captain Rackmore sailed to the nearest island and left his treasure chest behind. He gave one key to his first mate and kept the other for himself. Both keys would soon be lost to another naga attack, and a day later when the Drysnap makrura pulled the first mate into the depths of the sea.

Knowing the Gallant could not survive any more attacks, Captain Rackmore and the last few surviving sailors abandoned the ship and set forth towards Nijel's Point. Although in the end, they reached the shore, they never made it to Nijel's Point, as they knew crossing Desolace would be too dangerous. Hoping someone would avenge them, Rackmore wrote these last events (including the location of the hidden chest) in his logbook.