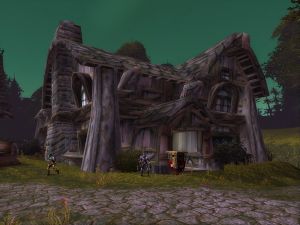 Gallows' End Tavern (or Gallow's End Tavern)[1] featured trainers for warriors, priests, mages, rogues, warlocks, enchanters, and first aid. It also had an innkeeper and a few other vendors. This tavern was notable because it is the only fully functional tavern known to be run by the Forsaken.

A captured Scarlet Zealot and Dwarven Mountaineer were held in the cellars.

The original music, "Undead Dance", can be played by running the following macro in World of Warcraft: /script PlaySoundFile("Sound\\Music\\ZoneMusic\\TavernHorde\\undead_dance.mp3")