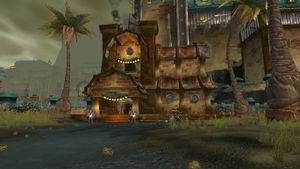 Gallywix's Villa is a large area in northwestern Bilgewater Port in Kezan. It was originally Trade Prince Maldy's manor.[1] This is where Trade Prince Gallywix lives, or rather did live before the port was destroyed by the nearby volcano. He also has the only dock at the port available in-game. His yacht is docked there. The villa is made up of a large walled area with a path leading to his yacht or pool, an area that contains the villa proper separated from the pool by a smaller wall, and an overlook towards the ocean. Villa Mooks and Kezan Socialites can be found here, along with Neill Penny.