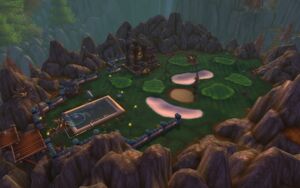 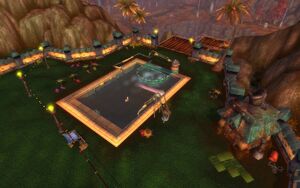 The pool at the Pleasure Palace.

The Gallywix Pleasure Palace is the residence of Trade Prince Jastor Gallywix, master of the Bilgewater Cartel. It was built on the summit of the relocated Forlorn Ridge in western Azshara, northeast of Talrendis Point. The Bilgewater goblins moved the mountain in order to strip mine its minerals.[1][2]

The palace has an ocean view, grenade golf course, a secret booze cellar, a luxury pool,[3] and a sauna. The booze cellar is not seen in the game.

The Gallywix Pleasure Palace was built atop Forlorn Ridge at some point after the Bilgewater goblins had settled in Azshara. Trade Prince Donais visited the palace during this time.

Gallywix ordered dozens of jeweled onyx panthers to roam the grounds of the pleasure palace.[4]

The palace was infiltrated and robbed of a potion by the Shadowblade of the Uncrowned sent by Marin Noggenfogger.[5] During the duration of the quest, Palace Security Guards, Palace Mooks, Trixyni Rustclamp and Gallywix himself are in there. Izak Mixmaster and the waitress are present, but Donais is not.

The palace was attacked by the void elf Magister Umbric and an Alliance adventurer as they chased Gallywix through a teleporter from Atal'Dazar on Zandalar. In the middle of a party, it was full of mooks, golfers, their caddies, waiters, sunbathers, and VIPs.[6]