From Wowpedia
(Redirected from Game Masters)
Jump to: navigation, search 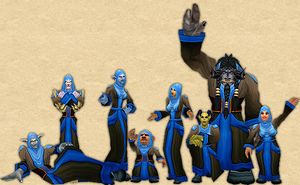 Game Masters, or GMs, are Blizzard employees who oversee World of Warcraft and watch over a server to solve problems, disputes, and sometimes punish people disobeying the Terms of Use policy Blizzard set forth. Players can create an in-game petition (usually called a "ticket") to alert the GMs of certain problems they are experiencing. GMs are reactive in their response to problems, and as a result won't take action until a ticket has been filed and they have been informed about the issue. The issue must be one they can assist with and they must be able to verify that action is required, which is done entirely via internal logs.

The term GM or Game Master has been occasionally and incorrectly used by fans to refer to any Blizzard employee working on World of Warcraft. To avoid confusion, developers, and others with specific jobs are referred to by those titles. All official Blizzard posters, GMs or not, are referred to as "blues" or "blue posters" on the official forums.

In October 2010, MachinimaRealm (on Youtube) released an interview with a former Game Master in World of Warcraft. She answered submitted questions from players about Game Masters. One question was about whether it was an office job or not. She answered that it was in fact a full-time office job. She then also mentioned that Game Masters could only play as a GM on special computers configured for it, so it is not possible to simply login as a Game Master using a password from home.

When asked about the work environment she answered that she believed Game Masters had to be among the most enthusiastic World of Warcraft-players she had ever met. They were not allowed to play the game while working but would often do so during lunch breaks. Another Game Master who answered questions submitted on Reddit was of another opinion, stating that becoming a Game Master was a good way to get rid of one's WoW-addiction. He did emphasize however that it was a really good work environment since they shared many of the same interests.

Main article: Chatting with a GM

There are a few ways a GM can contact a player:

There are a few things that Game Masters can't do but they are often mistakenly believed to be capable of. Some of these things include:

[Gamemaster's Robe], and a

[Gamemaster Hood], though one has been seen wearing aesthetic gear.

It should be noted that asking Game Masters these questions is not their purpose, and while they may have responded in a friendly manner, it's not recommended to clog up ticket queues with spam tickets.

Titles one can see in the official forums in signatures of Blizzard forum posters. So far, they tend to post in the Realm Status forum. It is known that Senior Game Masters are the "shift leaders". They make sure that none of the GMs do anything they are not supposed to do, and also hand in the weekly reports written by each of the Game Masters.

Some of the moderators of the Customer Support forum have Game Master backgrounds.