— During the Siege of Orgrimmar

Gamon is a level 90 elite named tauren found in the Valley of Strength within Orgrimmar. He can be rescued and will then assist players in The Drag area of the Siege of Orgrimmar raid, where the

[Gamon Will Save Us!] achievement is focused on him.

Gamon is well known to many Horde players and is the subject of numerous memes and jokes. Until the Cataclysm expansion, Gamon was level 13 and one of the only Horde-attackable NPCs in Orgrimmar. He was part of an early rogue quest but was primarily renowned for being repeatedly killed for no reason. This familiarity eventually made him an effective symbol of the increasing brutality and racism of Garrosh Hellscream's Kor'kron forces during Mists of Pandaria, culminating with his raid appearance. As a former low-level named NPC who was elevated to a more powerful and prominent position (likely in recognition of his status among the player community), he is similar to the Alliance's Hogger. 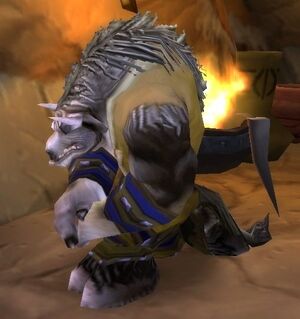 Gamon was present as a level 13 neutral NPC in Orgrimmar when World of Warcraft launched. He played a role for young rogues by holding

[Tazan's Key], which was required to be pickpocketed for

[13] The Shattered Hand. The quest described Gamon as a drunkard and the assistant of Tazan, a troll who traded with the pirates near Ratchet and who possessed information wanted by the Shattered Hand.

Because players cannot pickpocket friendly targets, Gamon had to be attackable. This, in combination with his non-threatening combat abilities, convenient placement in Orgrimmar's inn, and lack of consequences for his death, led to him being frequently and casually killed. Much to the frustration of rogues on the quest, this could make it quite difficult to find him alive to pick his pockets; they would have to count on his five-minute respawn timer and hope he did not get one-shot immediately by a high-level player.

As the community grew, Gamon attracted more and more attention for his role as a target for assassination and other attacks. His location in the main valley of Orgrimmar encouraged players to kill and interfere with him in more and more creative ways, such as dragging him in front of the auction house for more onlookers, or using

[Mind Control] to make him approach other players. A tradition began of responding with emotes to his corpse, ranging from /mourn to /laugh to /spit. Jokes, for instance about legendary weapons being looted from him, became common. Raids of level 1 players were formed to fight him as if he were a raid boss.

Some of this treatment by Horde players is comparable to that of Hogger by Alliance players; both serve as a sort of mascot for low-level, casual, social gameplay. Hogger, however, was not in a city, which meant that Gamon's murders were comparatively casual, spur-of-the-moment decisions, and had a wider audience - even if killed inside the inn, the sound of a tauren death groan could be heard from outside. Gamon was also neutral rather than hostile, marking him as a sort of "innocent". These differences contributed to the atmosphere of Orgrimmar as being a rough place compared to Ironforge or Stormwind. Gamon is ultimately much more well-known for this role as "victim of Orgrimmar" than for the quest he was involved in.

Death knights and the Forsaken revolt

At the end of the death knight introduction chain, when new Horde death knights entered Orgrimmar for the first time, Gamon promised to protect the citizens of the city from the encroaching "threat". While all other NPCs appeared simply unfriendly, Gamon was actively hostile and chased after any death knight that came too close, loudly yelling that he would save Orgrimmar. As a level 12 he was of little concern, but he did use a unique ability, Pride Breaker, which did no damage but dismounted players and punted them about 5 yards.

[Mind Control] on Gamon could use Pride Breaker, which was effective on friendly players and NPCs. Common targets included key NPCs such as bankers and auctioneers who could be moved by the punt effect, as well as players using large mounts such as mammoths in front of mailboxes and other key locations. The ability was made unavailable via mind control in patch 3.1.0.

During the Battle for the Undercity quest chain in which a faction of Forsaken betrayed the Horde, players were sent back to a phased version of Orgrimmar under martial law to talk to Thrall. Gamon could be seen among other loyal Horde citizens gathered in front of the bank. 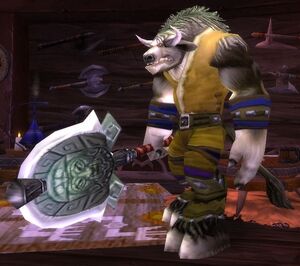 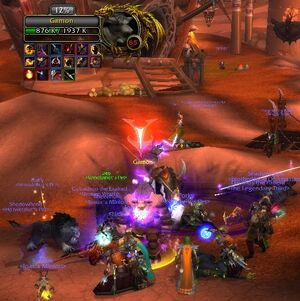 A raid-style kill of Gamon shortly after the release of Patch 4.0.3a.

The pre-patch for Cataclysm gave Gamon a substantial overhaul, going from a simple level 12 mob to a level 85 elite. He hit extremely hard and was a significant challenge to defeat, especially as players were still level-capped at 80 at that time. Until this point it was customary for some players to routinely kill Gamon simply because they could, with a single click of the mouse; many of those were caught off-guard by the change, idly attacking Gamon only to find themselves one-shot by the mighty 85 elite he had become overnight. Death knights completing the introductory quest chain that led them into Orgrimmar also faced the wrath of Gamon, who was able to charge and one-shot the far lower-level death knight. Gamon's appearance largely remained the same, but where he was previously empty-handed, he now sported an impressive and unique two-handed axe.

Following the changes, players formed raid groups to kill Gamon, commonly kiting him out of the inn to fight him in full view of dozens of players. Players also resumed the joking claims that epic and legendary items were drops from Gamon. In reality, he continued to drop typical level 12 loot.

The change prompted the creation of a number of forum threads, with many players thrilled and amused to see Gamon apparently wreaking revenge on those who had killed him so repeatedly for so long. The many forum posts included a comment from Blizzard moderators:

He’s been eating a lot of porridge so don’t get him mad.

If you do, form a raid. He drops many copper!

Imagine how you would feel being beaten up everyday by low-level ale drinkers just for kneeling there with a yellowy glow.

After the announcement of Garrosh Hellscream's ascendance to the throne of the Warchief earlier that year, the phrase "Gamon for Warchief!" had begun to appear on various fan sites, including as a poll on MMO Champion.[1] With the changes in patch 4.0.3a, the slogan gained even more popularity, with many humorously predicting an assault by Gamon upon Garrosh.

As the expansion progressed, players reached level 85 and acquired ever more powerful gear, making Gamon a far less challenging opponent, able to be defeated by a small group or even single players. Without the immediate ease of killing him in one hit, and with the novelty of his level boost gone, his fame waned as he was engaged far less frequently compared to his early days.

Patch 5.3.0 brought changes to Orgrimmar. The status of the Kor'kron increased, life in the city became more martial as Garrosh Hellscream tightened his grip on the city, and an attitude of orc superiority was prevalent. Gamon, as a recognizable non-orc Orgrimmar NPC, was an ideal representative of those changes. He could be witnessed surrounded between the auction house and the Broken Tusk inn in the Valley of Strength by several Kor'kron Overseers, who demanded that he put his axe down and go with them quietly.

Gamon was taken to the Drag and forced to kneel beside a tree, under the watchful eye of a Kor'kron Overseer and the rifle sights of three Kor'kron Grunts.

Kor'kron Overseer says: Lash him to the tree!

It is there that players find him tied up during the Siege of Orgrimmar raid in patch 5.4.0. He feels hatred for falling to orcs in battle and, after being freed, participates in the fight against General Nazgrim. He is also the subject of 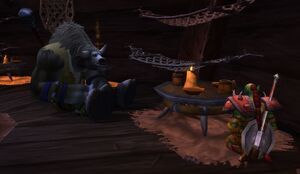 After Hellscream's downfall, Gamon moved to the second floor of the Broken Tusk inn with his "lady friend"[2] Grunt Meena and received the title "Hero of Orgrimmar". It seems that he was not content to stay there long, because he is one of many NPCs to visit the Frostwall Tavern and Lunarfall Inn if players choose to build them in their garrisons. There he states that he came through the Dark Portal in order to "cleave orc skulls", but needs a new weapon for that purpose, sending players on the quests

[Gamon's Braid] to remember him by, allowing players to temporarily assume his form and use some of his voice quotes. 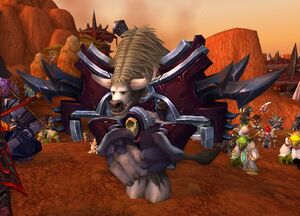 Gamon was present at Vol'jin's funeral ceremony outside the Dranosh'ar Blockade, wearing a new set of armor.

Gamon is one of two NPCs that appear randomly in the Tainted Area within the Vision of Orgrimmar scenario of the Horrific Visions. He is located on the second floor of the Broken Tusk Inn. Defeating him will provide a 10% health buff - Heroes' Bulwark.

Freed
Hrnngg... thank you...
I may be bruised and beaten, but the hatred boils inside me.
Many times have I fallen at the hands of an orc and many times have I risen again.
But never again.
For every orc that struck me, I will cleave a thousand of their skulls!
This ends here!
I, Gamon, will save us!

Aggroed Nazgrim if alive
You are an honorable orc, Nazgrim. I regret what I must do. 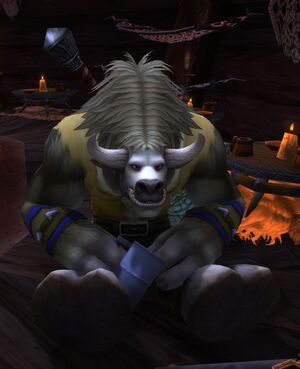 In the Broken Tusk 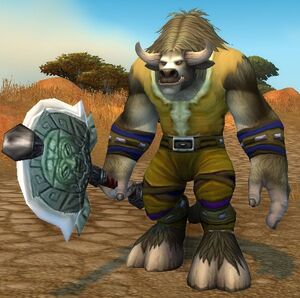 A player transformed into Gamon using