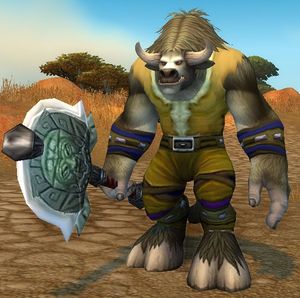 "With Gamon in spirit."

Gamon's Braid is a toy item that turns the player into Gamon, the (in)famous tauren from Orgrimmar, for 10 minutes. The transformation is accompanied by a voiced yell:

During combat, the player will randomly yell out various soundclips originally used by Gamon during the Siege of Orgrimmar, such as Taste my axe! or Pay for your crimes!.

This item is a reward from