For his encounter in Mogu'shan Vaults, see Gara'jal the Spiritbinder (tactics).

Gara'jal the Spiritbinder is a Zandalari troll priest. He lead numbers of Zandalari Invaders under the orders of Zul.

Gara'jal was one of the Zandalari who reunited Lei Shen's soul with his body on the Isle of Reckoning.[1]

Within the mysterious vaults of the mogu; untouched by time for thousands of years, Gara'jal led a band of trolls and assaulted the vaults. Gara'jal was determined to crack open this trove of ancient mystery and bring back whatever arcane power and knowledge he could find. Gifted with dark talents and surrounded by a loyal cadre of Zandalar mystics, he has broken through the outer walls and will not rest until the vaults belong to him.[2]

However the defenders of Azeroth stopped his plans and defeated him, which forced Gara'jal into the spirit world through a gate.

He comes back in Throne of Thunder, as Zandalari representative in Council of Elders in helping the others trolls.[3] Though the representatives were all killed, it is unknown if Gara'jal's spirit lingers on.[4] 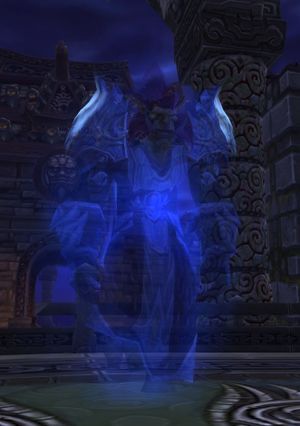 Gara'jal as a spirit in the Throne of Thunder.

Lei Shen let us prove ta ya the might of the Zandalari. We will crush des intruders where dey stand!
We will never fail ya!