For the character from the main universe, see Garad.

Garad was the chieftain of the Frostwolf clan before the rise of the Iron Horde. He was the father of Durotan, Ga'nar and Fenris Wolfbrother.

Before the Iron Horde 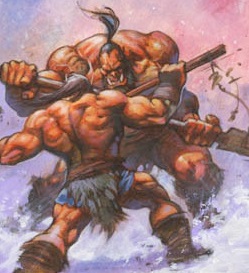 Though Garad pressed ideals of family and tradition on his son, Fenris, the latter believed that his destiny was greater. When their home came under threat from the gronn, giant beasts that could be brought down only through a coordinated effort, Fenris defied his father's wishes and hunted with the neighboring Thunderlord clan. Fenris was victorious and continued to hunt with the Thunderlords as well as with the Frostwolves. During a Kosh'harg festival, Garad declared in front of everyone that his son's pursuit of fame was hollow and without honor. Fenris then challenged Garad to a mak'gora and was defeated but not killed. Humiliated, Fenris left his native Frostwolf clan and joined the Thunderlords.[1][2]

When Fenris vanished, Garad chose his youngest son, Durotan, as the heir of the Frostwolf clan instead of the hot-headed Ga'nar.[3]

Rise of the Iron Horde

Twenty years later, the Iron Horde formed. Garad refused to join the murderous campaign and isolated the Frostwolf clan in its home in Frostfire Ridge, causing the other orc warlords to mobilize to bring the Frostwolves to heel. At this critical moment, Chieftain Garad and his son Ga'nar disappeared in the frozen wastes.[3] Both of them were ambushed by Fenris, now known as the Iron Wolf. Garad was killed, while Ga'nar was forced to watch his father die and then left for dead.[4]