“Out of nowhere, he was grabbed by stony talons and whisked away into the night sky...”

The dreaded gargoyles of Northrend are voracious flying creatures who revel in slaughter and mayhem.

Gargoyles were brought to Lordaeron from the frozen Northrend by Arthas Menethil's armies for the siege of Quel'Thalas, where they notably killed elven runners[2] and sunk three ships - the Morn'danel, the Fellovar, and the Varillian - with almost one hundred elven children.[3]

Now, gargoyles live in the Eastern Plaguelands and the Ghostlands. These strange, wiry flyers have rough, crystalline hides which protect them from all manner of attacks.[4]

Gargoyles make effective scouts and can be deadly if left to rain attacks from the air, but they have a very obvious weakness. Most of them have to go through long periods resting as stone to maintain the energy they need to carry their heavy bodies through the air.[5] In times of great peril, gargoyles also land and condense their crystalline hides into a stone-like surface to make themselves nearly impervious to any form of attacks. Though they are unable to attack in this state, they can take time to regenerate their wounds and replenish their energies.[4] When in stony form, they can be destroyed and shattered.[6]

The grotesque is a smaller gargoyle used to divert the flow of rainwater on Scourge buildings to prevent mausoleum flooding.[7] There are also gargoyles affiliated with the Twilight's Hammer and the Old Gods.[8] It is unknown if these are related to the Scourge gargoyles or if they have been created by the Old Gods. 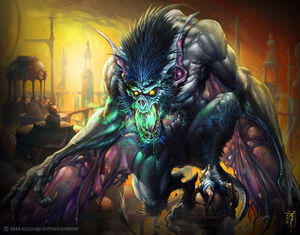 A gargoyle in the TCG. 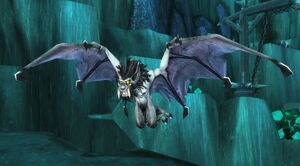 A gargoyle in World of Warcraft.

[Grotesque Statue] has a chance to drop from Azgalor in Hyjal Summit.

Gargoyles are not undead creatures in the Warcraft RPG. They are marked as undead in Warcraft III and WoW. Appendix Three of Manual of Monsters describes a different type of gargoyle which is described as formed of stone and earth and a proto-golem, however, the validity of the source is disputed. Although, it does say that they are part of the Scourge and gargoyles are known to use their Stoneform in Warcraft III and WoW. Many kinds of gargoyles can be found around Azeroth, some of the more common types include the subspecies of gargoyle represented by various groups of mobs, as well as Dire gargoyle (subspecies, possibly to differentiate from the normal gargoyle in Appendix Three). In Manual of Monsters Appendix Three, there are other subspecies of gargoyles: Four-Armed Gargoyle, Green Gargoyle, and Margoyle, however, the validity of the source is disputed.

In contemporary fiction, Gargoyles are typically depicted as a (generally) winged humanoid race with demonic features: generally horns, a tail, and talons. The term technically refers to any stone carving used as a waterspout, and not a specific creature at all.