From Wowpedia
(Redirected from Garithos)
Jump to: navigation, search

Grand Marshal Othmar Garithos was the leader of remnants of the Kingdom of Lordaeron following its downfall during the Third War, as well as the de facto leader of the Alliance resistance in Lordaeron. He was leader of the army by chance, not by merit, being the highest-ranking survivor of Lordaeron's military. Garithos was an ill-tempered and xenophobic man;[7] even in the situation the Alliance was facing after the Third War in Lordaeron, he was disdainful of the non-human races in the Alliance, though he cooperated with the undead that would eventually become known as the Forsaken.

Othmar Garithos was the only son of a baron who ruled the lands bordering Quel'Thalas. After growing up in the town of Blackwood, Garithos joined Lordaeron's army as a knight during the Second War. While he was fighting to defend Quel'Thalas, a small band of orcs broke off from the main invading force and put Blackwood to the torch, killing all of its inhabitants. Othmar's family perished trying to defend the lives and homes of their subjects. Garithos blamed the elves for the loss of his home and family, believing that they had diverted troops that could have been used to defend humanity. After the war, Garithos inherited his father's title and continued his service in Lordaeron's military.[6]

At some point prior to the Third War, Garithos employed a clerk named Kristoff. In that role, Kristoff's organizational skills became legendary in the military.[3] 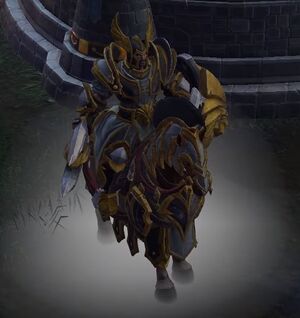 By the time of the Third War, Garithos has risen to the rank of Grand Marshal, promoted not necessarily due to his own abilities, but by his father's reputation and title. He was the highest-ranking survivor of Lordaeron's military after the Scourge's rampage across Lordaeron, and he recruited what forces he could muster from both volunteers and conscripted civilians. Cut off from the chain of command, Garithos gave his human army the mission that he assumed the Alliance should have always had: the preservation of humanity above all else. Ignorant of Garithos' policies, officials from neighboring non-human states such as Ironforge sent him aid, recognizing him as potentially the last remnant of Lordaeron's government, and certainly the strongest warlord in the area.[6] The healthiest blood elves led by Kael'thas Sunstrider, prince of the ruined Quel'Thalas, also joined his army.[8] Garithos did not enjoy having to work with the blood elves[9] or dwarves,[10] believing that the Alliance's mission should be to preserve humanity above all else[6] and that the Alliance should never have accepted the elves in the first place.[9][8]

The defense of Dalaran

Garithos and his forces managed to retake Dalaran from the Scourge,[11] and used it as their base.[12] Later, Garithos gave Kael'thas the job of overseeing a caravan of supplies being ushered out of ruined villages.[13] Though Kael completed the mission, he wanted his people on the front lines with Garithos' main force.[12]

While they were in Dalaran, Garithos' scouting parties discovered a large undead strike force advancing through Silverpine Forest to attempt to retake Dalaran. Before Garithos left to push back the advancing Scourge from the south, he informed Kael'thas that he and his brethren would not accompany them on the front lines. Instead, they would be tasked with fixing the nearby observatories to watch for Scourge flanks from the west, much to Kael's dismay.

Kael'thas performed his duties to the best of his abilities, but he had to accept the help of Lady Vashj and the naga. When word of this reached Garithos, he immediately went to Kael and reprimanded him for consorting with the snake-people.[12]

The observatories repaired by the Alliance Remnants discovered that an undead strike force was coming from the west. Garithos returned to the front and left Kael'thas awaiting orders. Then, an Emissary sent by Garithos informed Kael'thas that he had to engage the strike force from the west, but also recalled all foot soldiers, cavalry and support teams to the front, leaving Kael with only his blood elven troops.[9] Garithos had hoped that the elves would fall before the Scourge, and no longer be his problem;[14] the missions given to Kael's greatly reduced force were intended to be suicidal, impossible for the elves to complete.[15]

Garithos defeated the undead in the front with the forces he had amassed. However, Kael would have surely been defeated had he not accepted another offer from Vashj and her naga to aid in the destruction of the western Scourge forces.[9]

Imprisonment of the blood elves

Garithos returned with soldiers and saw the naga leaving the scene. With proof that the blood elves were in league with the naga, Garithos condemned Kael'thas and all of his men to death. He explained that he never trusted the elves, and felt it was a mistake to accept them into the Alliance in the first place.[9] He arrested Kael and his servitors and locked them in the dungeons of Dalaran to await their execution, under the guard of Kassan.[16]

Exodus of the blood elves 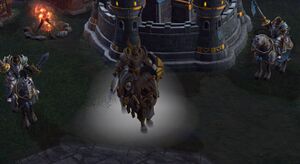 Garithos orders his men to stop the elves from reaching the portal.

Soon Garithos heard that Kael had escaped with Vashj's help, and that the blood elves were fleeing through a mystic portal - the same portal Kel'Thuzad opened to bring Archimonde to Azeroth. Garithos sent his men, armed with explosives, to destroy the portal, but the elven engineers Kael had freed used their knowledge to construct strategic defense systems. Kael and Vashj defended the portal and eventually fled themselves.[17] The portal took them to the shattered realm of Outland.

Garithos, though furious, turned his attention back to the advancing undead. He pushed them back into Plaguelands, but was soon faced with the dreadlords, Detheroc and Balnazzar. Detheroc's powers of mental domination allowed him to enslave Garithos and his men. The humans served Detheroc and Balnazzar for some time until they were attacked by Sylvanas and Varimathras. Sylvanas slew Detheroc, and Garithos was freed from his bondage.

Garithos was suspicious of Sylvanas, but she explained that she was no longer a member of the Scourge. She offered to help Garithos and his men reclaim their lands in exchange for their assistance in defeating the final dreadlord, Balnazzar, who remained in control of Lordaeron's Capital City. Garithos accepted the banshee's terms - but she had no intention of keeping her word.[18]

Seven of Garithos' advisors (including Kristoff) warned Garithos against allying with the rebel undead, but Garithos would not change his mind. Fearing the undead would betray the Alliance, Kristoff left for greener pastures.[3]

Assault on the Capital City 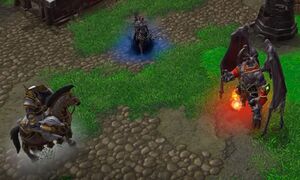 As Garithos and Sylvanas met to plan their attack on the Capital City, Varimathras pointed out that it was heavily defended. Balnazzar controlled a sizable undead army, and the battle could be won only through attrition.

Sylvanas chose to launch a two-pronged attack on the capital: her forces would make a front assault while Garithos' forces attacked the city from the rear.[10]

As the battle commenced, Garithos received word that his dwarven reinforcements had become lost in the wilderness. Though he feared they were more trouble than they were worth, Garithos recognized that he would need them on the front lines (as none of his other troops had long-range weaponry or siege equipment). Garithos quickly left to find the dwarves and bring them back to his base.[10]

At least one dwarven rifleman felt he wasn't being paid enough to put up with Garithos.[10] 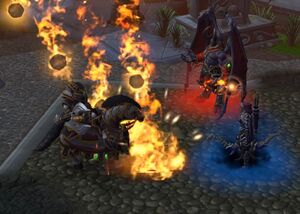 The combined forces of the Alliance and the rebel undead succeeded in dispatching Balnazzar's forces and taking control of the city. With Balnazzar defeated, Garithos watched as Sylvanas ordered Varimathras to execute him. Despite their laws, which forbade one nathrezim from killing another, Varimathras did so.

Garithos was lightly amused, but quickly changed his mood and ordered the duo to leave his city. Instead, Sylvanas ordered Varimathras to kill Garithos as well. Varimathras happily complied and killed Garithos, who was cannibalized by ghouls moments later.[10]

Sylvanas would go on to name her followers the Forsaken, and would use the Undercity beneath the capital as their new base.