Garr is a conglomerate lava elemental boss found in Molten Core between Gehennas and Baron Geddon, and guarding the Rune of Blaz. He is a melee boss with 8 Firesworn guards. 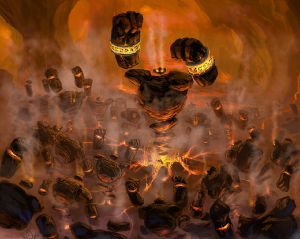 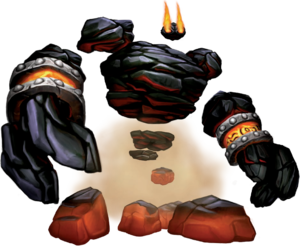 Garr is described as one of the lieutenants of Ragnaros who accompanied the Firelord into Azeroth during the War of the Three Hammers. He carried out the betrayal of Lord Thunderaan, the Prince of Air and otherwise referred to as the "Windseeker." During the Elemental Sundering, Ragnaros sought to consume Thunderaan, and did so by having his two lieutenants, Baron Geddon and Garr ambush him. Thunderaan, caught off guard, was utterly destroyed. Ragnaros almost completely consumed Thunderaan's essence, and stored the rest within a talisman of elemental binding. Ragnaros cleaved this talisman into two equal pieces, to which he assigned Baron Geddon and Garr.

As one of the two chief lieutenants serving under Ragnaros, Garr plays a key role in the current success of the Firelord and his spreading influence. Garr, like Baron Geddon, holds half of Bindings of the Windseeker, which contains the remaining essence of Thunderaan, Prince of Air. Tales say that after centuries of partnership, Geddon became suspicious of Garr and felt the elemental sought both halves of the talisman. Thus, relations between the two powers are strained. Both Garr and Baron Geddon draw their considerable might from the blazing runes carved deep into the floor of Molten Core.[2][3]

Garr is back in Mount Hyjal at the west of the Sulfuron Spire as a rare spawn.

Two orbs of molten lava are set into the hill of stone that constitutes this creature’s head, the whole resting atop a mountainous torso. Two immense bands of metal bind the creature at what might be its wrists, if those massive stone appendages can be called arms. Garr uses earth glide to rise up among the highest concentration of his enemies. He takes advantage of his magma shackles and anti-magic pulse by moving to keep his ground-based enemies within these areas of effect. He attacks and backs off to keep his opponents from making full attacks against him while his army of elementals surrounds and protects him. In melee he simply pummels his foes and pushes them into rivers and lakes of lava.[4]

Reduces the movement speed of nearby enemies to 40% of normal for 15 sec.
Type: Magic
School: Fire
Radius: 45 yards 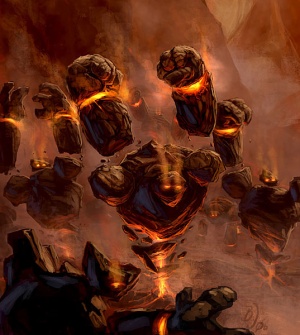 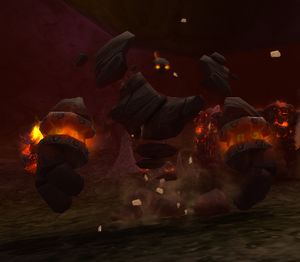 The more warlocks in a group, the easier this battle will be, but this strategy still works with only a couple. Each warlock is assigned one of the firesworn. For that specific firesworn, a warlock must keep the firesworn banished and have a voidwalker to tank it in between banish breaks. Every firesworn that is not assigned to a warlock must then be offtanked and killed by dps. During the fight, the group will benefit the most if all of the mobs are kept spread out, so as to prevent any difficulties with explosions and Garr's debuff abilities.

Caution: when firesworns die they explode, causing large amounts of damage to all surrounding group members. When they are about to die, melee must get away from firesworns so as to save health and save healer mana.

When all tank-assigned firesworn are down, the group can then focus on Garr, which should be tanked by the MT from the very start of the fight. Warlocks must remember keep their targets banished at least until Garr falls.

Once Garr is dead the raid needs to kill the remaining banished firesworn one at a time.

Have 1 player tank Garr and all the adds. Allow threat to be built up with Demoralizing shout prior to DPS. This can be tricky as the tank will obviously require a tremendous amount of healing. Several paladins or priests need to be constantly removing the Immolates from the tank. Once Garr is down the firesworn can be AoE'd down.

Garr from a Hunter's Perspective