Garwal is a level 71 worgen who is currently hiding in a worg form in western Rivenwood in the Howling Fjord. Managing to trick Ulfang's brothers, Garwal quickly became the alpha worg for reasons unknown. Eating

Talonshrike's [eyes] will allow that person to see even through the unnatural magic that Garwal uses to make him invisible to all.

He will morph into a worgen halfway through the fight, exclaiming: "Enough of this charade!".

Before it was hotfixed on July 7, 2009, hunters could tame him as a wolf pet, even while he is in worgen form, although he would eventually return to his wolf form.

The following strategy is provided for historical purposes only. 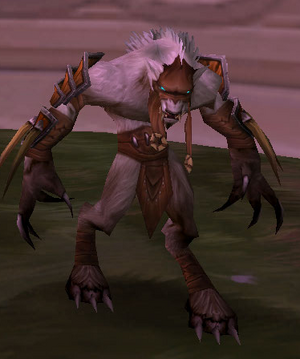 Garwal in his tamed worgen form.

[Tame Beast] to end exactly when he transformed at 50%, Garwal would stay in his transformed form, giving you an exclusive worgen pet. Only players who had not completed his associated quest could see Garwal.

Taming Garwal to keep him as a worgen:

Please note, for players who have a worgen version of Garwal, if you take him into an arena, he will revert back to his wolf form permanently, although battlegrounds are safe.

For at least some players (unknown if this is a game-wide change), Garwal was completely reverted into a wolf pet, using his white wolf model. This is most likely due to the fact that Worgen are the new Alliance race in the Cataclysm expansion set.

It appears that in today's maintenance, all the remaining tamed versions of the worgen changed to the normal 'white worg' wolf skin. In addition, these wolves seem to have reset to level 68 (or the level of the hunter – 5, whichever is higher). On the plus side, these wolves are once again proper Wolves, with talent trees and pet skills. - Mania

For the players who had tamed Garwal in either form, their pet is no longer considered a 'pet' by the game. He has no talent tree, special abilities, or scaling. He also cannot be fed, meaning the only way to keep him happy is by having [Glyph of Mend Pet]. He is now nothing more than a trophy pet.