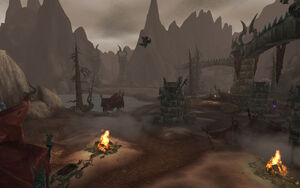 is an area within the new Darkwhisper Gorge (it is technically just outside the borders of the original pre-Cataclysm gorge) that belonged to the Burning Legion, but was taken by force by the Twilight's Hammer. The cult then began to alter the landscape and build their structures when Garnoth, Fist of the Legion and his army slaughtered the cultist and took back which was theirs.

There is a lake with a small island that contains a gateway. This island is a quest hub and the gateway is a door to the Emerald Dream. Once opened, the defending forces (but not players) can "freely move between Moonglade, Nordrassil, and even Wyrmrest." After completing

[81] Twilight Riot, Commander Jarod Shadowsong, Ysera, and Cenarius can be found here. The lake seems to be the source of the Southfury River.

[81] Slash and Burn, a cut scene will happen and the Guardians of Hyjal will appear and make the small island a forward outpost. The following NPCs will then appear. 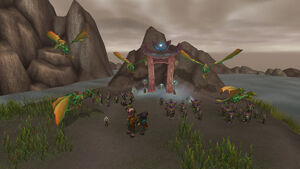