Gates of the Abyss (WC3 BloodElf)

From Wowpedia
(Redirected from Gates of the Abyss)
Jump to: navigation, search

Gates of the Abyss is the chapter 5 of the Warcraft III: The Frozen Throne Alliance campaign, Curse of the Blood Elves.

The combined Blood Elf and Naga forces protect Illidan as successfully he closes the closest dimensional gateway to their encampment. With the first gateway closed Illidan's forces move out to find the next one when they encounter a group of fel orcs besieging a Draenei village. After destroying the fel orcs Akama and his tribe pledge their support and loyalty to Illidan in thanks. With their forces bolstered the Illidari are able to destroy the fel orc bases nearby and close the remaining dimensional gate ways, ensuring that Magtheridon will be unable to receive reinforcements.

A brutal Pit Lord named Magtheridon commands a vast army that pours through the Dimensional Gates daily. Only Illidan has the power to close each Gate by stepping onto the Dimensional Nexus. Kael will need to protect Lord Illidan while he works his magic for 3 minutes.

Illidan Stormrage: Long ago, after Draenor's explosion, a brutal Pit Lord named Magtheridon rallied the surviving orcs and took control of Outland. Since then, his forces have grown strong.

Prince Kael'thas: How, master? If most of the orcs were killed when this world exploded, how has he bolstered his ranks?

Illidan Stormrage: By using the very portals that tore the planet apart. Many of Ner'zhul's dimensional gates still stand, young prince. Magtheridon lures scores of hapless demons through them daily.

Prince Kael'thas: Then we must seal them permanently.

Illidan Stormrage: Yes. We will seek out each of the gates and I will close them myself. Once they have been sealed, we will move against Magtheridon's Black Citadel, and claim Outland as our own.

Prince Kael'thas: It's working. Illidan is closing the portal! We've got to buy him more time!

At the middle of the battle

Prince Kael'thas: Master, Magtheridon must have discovered us! His orcs have already begun their assault!

Illidan Stormrage: Our forces must hold them back while we search for the dimensional gates!

Prince Kael'thas: Magtheridon's forces have besieged that Draenei village! If we drive them back, the Draenei will join us in our fight!

After the fel orcs attacking the draenei had been defeated

Akama: I am Akama, Elder Sage of the draenei. Lord Illidan promised to rid us of our ancient enemies in exchange for our loyalty. These cursed orcs serve Magtheridon--a terrible lord whose Black Citadel lies to the west. Under his command, the orcs hunted us to the brink of extinction. But now, with Lord Illidan behind us, we will fight back and retake our ancestral lands.

Closing the rest of the portals

Prince Kael'thas: Master, the final dimensional gate is surrounded by demons! We're going to have a serious fight on our hands.

Illidan Stormrage: Do not fear the demons, Kael. In time, they will call you master!

If Illidan is hit

Prince Kael'thas: We've done it, master! The dimensional gates are all sealed. There's no way for Magtheridon to call reinforcements now.

Illidan Stormrage: True, but his standing forces are still considerable. Assaulting his Black Citadel will not be easy, Kael.

Prince Kael'thas: I wouldn't have it any other way. 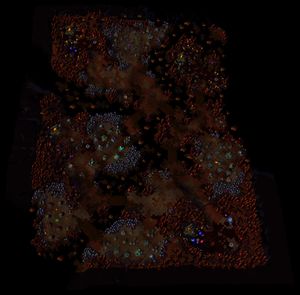