From Wowpedia
(Redirected from Gavinrad the Dire)
Jump to: navigation, search

For his appearance in Warcraft III, see Gavinrad the Dire (Warcraft III).

Gavinrad the Dire was a knight of Stormwind and one of the first five paladins of the Knights of the Silver Hand along with Uther the Lightbringer, Turalyon, Saidan Dathrohan, and Tirion Fordring. He would later be killed by Arthas Menethil while attempting to guard the buried remains of Kel'Thuzad.

The First and Second War

At the beginning of the First War between the human Kingdom of Stormwind and the orcish Horde, Sir Anduin Lothar decided to use the orcs' mobility against them and placed large numbers of human troops under the command of the loyal knight Gavinrad the Dire. In some cases, small units of human knights were able to bring down entire orc raiding parties without any casualties.[1]

Near the end of the war, when Lothar led a war party to Karazhan to confront Medivh, he charged Gavinrad with commanding Stormwind City's defenses in his absence.[2] Shortly thereafter, the Horde began laying siege to Stormwind, and King Llane was assassinated by Garona Halforcen. When Lothar returned, he ordered a mass evacuation of the city. He, Gavinrad, Khadgar and the remaining soldiers gathered Prince Varian, Queen Taria and any other citizens they could find and led them toward the harbor to escape on the ships, though they lost many people along the way, including Taria.[3]

Gavinrad accompanied Lothar and the other refugees during the exodus to Lordaeron. The battle-hardened knight was considered one of the most pious of Lothar's troops, and Lothar recommended to Archbishop Alonsus Faol that Gavinrad join Uther, Turalyon, Tirion and Saidan as one of the first members of the Knights of the Silver Hand, and the Archbishop agreed.[4][5] As training progressed, Faol presented each of the paladins with enchanted librams that were among the church's most ancient relics. Each libram represented a core trait of the Silver Hand that Faol challenged his students to become the living embodiment of. Gavinrad was given the Libram of Compassion.[5]

He and the rest of the paladins were later present at the ceremony where Arthas Menethil, crown prince of Lordaeron, joined the Silver Hand. It was Gavinrad who gave Arthas the hammer known as 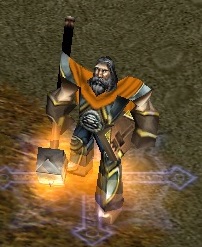 After the death of the necromancer Kel'Thuzad and several strange happenings in Lordaeron, Uther the Lightbringer thought it wise to ensure that the necromancer never walked again. To that end, he stationed Gavinrad and his Champions of Peace to guard the cemetery near Andorhal, where Kel'Thuzad was buried. The Undead Scourge, however, had been ordered by Tichondrius to retrieve and resurrect the remains, and so Gavinrad ended up face to face with the treacherous Arthas, now a death knight of the Scourge, who advised the paladin to step aside. When Gavinrad refused, Arthas unleashed his undead forces upon him and his forces, personally killing the paladin and feeding his soul to Frostmourne.[6] Though Arthas threatened to raise Gavinrad from the dead, the paladin's body was simply left where he fell.[7]

After Frostmourne was shattered, Gavinrad's spirit was freed, but his soul now wanders Icecrown Citadel as Gavinrad the Cruel. Frost death knights seeking to reforge the shards of Frostmourne into two new swords are forced to grant Gavinrad's spirit a final death before they are able to claim the shard that he is guarding.[8]

Aggro
The Silver Hand will remove your blight from this world!

Considering that he was a Stormwindian knight before becoming a paladin, Gavinrad was likely originally a member of the Brotherhood of the Horse.