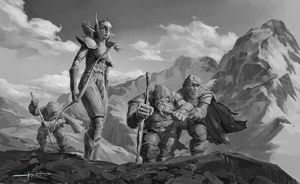 Gavvin Stoutarm was a dwarf sent by Brann Bronzebeard and Anduin Wrynn on an expedition to Silithus. He was in charge of the Explorer's League expedition, which encompassed a gnome named Sapphronetta Flivvers, three dwarves, and a handful of night elf Sentinel bodyguards, which included Sentinel Cordressa Briarbow.

On the first night in Silithus, Gavvin commented that he would sleep well that night because he would be guarded by the elves. One of his dwarven companions retorted saying it would be the six pints of brew he drank that would help me sleep well.

In the middle of the night, his camp was attacked by Horde forces but he wasn't vulnerable, despite having no weapon. He fought back the attackers with his fists, feet, and teeth.[1]

Thanks to Cordressa Briarbow, Gavvin along with Inge Ironfist and Arwis Blackstone survived the attack and escaped to Darnassus. From there, they took a portal to Stormwind carrying letters for High Priestess Tyrande Whisperwind and King Anduin Wrynn.[2]