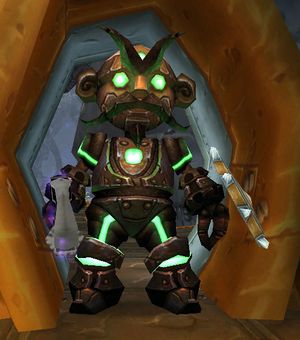 Gearmaster Mechazod is a mechagnome who was rebuilt by the gnomes from titan parts found near Fizzcrank Airstrip. He intends to transform all living gnomes back into mechagnomes by curing them of the Curse of Flesh.

After being reassembled, Mechazod declared his goal to rid the world of "the Curse of Flesh", in pursuit of which he has set about "curing" living gnomes of their fleshy affliction - transforming them into an army of clockwork gnomes. He currently resides in the Borean Tundra.

Because of his deranged crusade against organic life, both Greatmother Taiga of the Horde and Fizzcrank Fullthrottle of the Alliance have placed a bounty on his head.

His four lieutenants are Twonky, ED-210, The Grinder, and Max Blasto.

[Mechazod's Head] for the quests:

Mechazod appears in Hearthstone as the boss of the Unite Against Mechazod! and Return of Mechazod! Tavern Brawls, in which the two players must work together to defeat the Gearmaster.