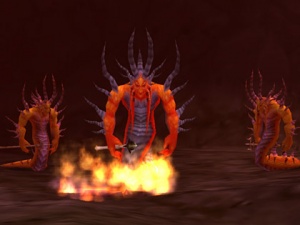 Gehennas and his fellow flamewakers were extricated from the Elemental Plane by Ragnaros shortly after Thaurissan accidentally summoned the Firelord. Unlike the fire elementals, who are beings of pure flame, the flamewakers are elementals composed of flesh and blood. Gehennas resides near the bottom of the Firelord's elemental hierarchy and covets the power and station of his superiors. He is distrusted by all who serve with him, with the exception of his two loyal guards, who believe they might gain from their overseer's ascension.[1]

Gehennas uses shadow magic and guards the Rune of Mohn along with two Flamewakers.

Stuns nearby enemies, rendering them unable to move or attack for 4 sec.
School: Physical
Radius: 8 yards

Hacks at an enemy's armor, reducing it by 1000 per Sunder Armor. Lasts 20 sec. Can stack up to 20 times.
School: Physical
Range: Melee

Clear the entire area around Gehennas and then pull the guards to the south west and tank Gehennas in the center of the room. Make sure Gehennas is far enough away that the only people in range of his curse, shadow bolt, and rain of fire are the main tank and his healers/decursers. The two guards need to be tank far away from Gehennas and need to be kept a decent distance apart, otherwise the tanks and melee DPS will end up stun locked the entire battle from the two cleaves. The MT on Gehennas will need a dedicated decurser usually a mage, but a druid will work as well. The tank must have the curse removed as soon as possible. Gehennas deals a fair amount of damage and you will not be able to keep the tank up if he is only receiving 25% of the healing. Once the two guards are dead the entire raid should focus on killing Gehennas. The guards go down pretty quickly, Gehennas takes a while.

Mages and druids in this fight should be sure to adjust their decursing priority list to place the MT at the top, followed by other melee players, as the curse greatly reduces the amount of healing a player can receive.