The Gelkis clan are centaurs who have made their home in the southernmost parts of Desolace. They are mortal enemies of the Magram clan of centaur, a brother tribe also located in southern Desolace. The founding leader, or Khan, of the Gelkis was Gelk, second of the alleged offspring of Zaetar and Theradras. The Gelkis were once willing to befriend adventurers of the Horde and Alliance in exchange for doing evil acts towards the Magram clan, while under Khan Shaka's leadership. They are presently led by the Khan Shodo and his three sons.

The Magram held no alliance with their brother tribes, until Khan Shodo's sons were slain and was reunited with his daughter, who was captured by the Maraudine clan.

Originally led by Khan Gelk, the Magram situated themselves in the southernmost regions of Desolace when the centaur divided into five tribes and have remained there ever since.

When the Gelkis clan spoke out against Khan Magra of the Magram clan's notion that strength was essential and the tribe's survival depended on their fighting spirit, arguing that Theradras always watches over the centaur and will keep the tribes safe and alive, an eternal feud between the two tribes was born.

As such the Gelkis are more civilized — or as close as centaur can come to civilized - than their brethren, with an organized social structure and a firm grasp of the Common tongue. While the Magram only respect strength, the Gelkis respect nature and their birthmother Theradras, calling upon her protection and the power of earth to maintain their existence. Though the Magram view this as weak it would seem to be an erroneous view, as Earth Elementals can be sighted in Gelkis Village, putting an end to unwelcome intruders alongside their centaur masters.

No longer needing to request aid from adventurers of the Alliance and the Horde and being the strongest of the clans - between the Magram and Kolkar clans, due to Burning Blade, demons, and the centaurs nearly killing each other off. This has allowed the Gelkis to maintain their strength and continued to grow. Under the new leadership of Khan Shodo and his three sons, they now actively attack outsiders.

When Khan Shodo's sons were slain he stopped caring about the land and the demons which continuously invade it, feeling that he has failed his clan and his forefathers. He eventually agrees join forces with the Kolkar and Magram, after being reunited with his captured daughter.

Some time after the Cataclysm, the Gelkis and other clans of centaur joined under the new High Khan. 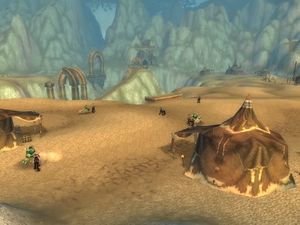 Gelkis Village is located just to the east and slightly south of Shadowprey Village in southwestern Desolace. It is the principal village of the Gelkis, and is situated in a ring around a large ravine. A cluster of cliffs and bluffs in the ravine are connected by a series of bridges and lead to a cave in the southern mountain face of Desolace. The Gelkis khan resides within this cave. The entire village is directly adjacent to Desolace's main north-south road and is thus a hazard for many travelers.

These centaur have made their home in the southern region of Desolace. Mortal enemies of the Magram Centaur.

[35] Death to Agogridon, with the latter granting enough reputation to reach Exalted ranking with the faction.

Should the player have already finished the quest before Patch 8.0.1, they can speak to Karnum Marshweaver at Karnum's Glade to receive the reputation reward.

The clashing cultural values of the Magram and Gelkis are the founding reason for their animosity towards one another, and it has only spiraled downwards since their initial disagreement.

The Gelkis representative Uthek the Wise, stationed just northwest of the main village in a small tent on the borders of Gelkis territory, recruits foreign aid to strike against the Magram and organizes strategic missions - not all involving violence - to weaken them.

In order to be deemed worthy of the Gelkis' trust, adventurers must gain reputation with the tribe by slaying members of the Magram until they reach Friendly status with the Gelkis. Each kill gives 5/20/25 reputation to the Gelkis faction and lowers the reputation of the Magram by 25/100/125. As of April 2009, kills reward full reputation, even at level 80. Previously, if mobs were at grey difficulty, they only awarded 1/5 reputation, however this appears to have been changed.

By far the most straightforward, if slow, way to gain reputation with the Gelkis is to camp next to Warug of the Magram. While he cannot be attacked, Warug's Bodyguards can and reward 5 Gelkis rep / -25 Magram rep per kill. What's more, they continually respawn to ensure that Warug always has two bodyguards, saving one from having to roam around the camp looking for victims. Note that this seems to be bugged, and occasionally the guards will spawn as Friendly and unattackable even at low faction rep with the war flag turned on.[1]

In earlier builds a player could become friendly or higher with both Centaur clans at the same time, by having someone else in a party kill a member of the Gelkis or Magram, which would cause the player to gain reputation with one Centaur clan, while not losing reputation with the other. As of patch 2.2, the player will gain and lose reputation regardless of who in the party actually does the killing.