From Wowpedia
(Redirected from Genedar)
Jump to: navigation, search

The fields of Nagrand in Safe Haven, with Oshu'gun in the distance.

Oshu'gun (pronounced "aw-SHOO-goon"), orcish for "Mountain of Spirits", is located in southwestern Nagrand. It is a great, white monolith that dominates the landscape, but instead of being jagged and irregular like other mountains, it is smooth and triangular - it is said to be the largest diamond in the known universe by Gezhe. It was being harvested by a faction of ethereals opposed to the Consortium.

In reality, however, Oshu'gun is a naaru dimensional fortress known as the Genedar,[1][2] and was used to help the draenei flee Argus thousands of years ago, traversing the Twisting Nether. At some point, the Genedar split into two separate vessels, with the most elite of the draenei's warriors boarding the Xenedar with the naaru Xe'ra and forming the Army of the Light.[3] The rest of the draenei visited dozens of worlds aboard the Genedar,[2] before crash-landing on Draenor approximately two centuries before the First War. Deep within the massive crystal dwells the naaru K'ure, accompanied by ancient orc ancestors, the spirits of orcs who have passed on. 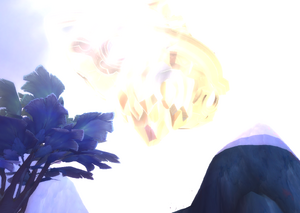 The Genedar appears to rescue Velen and his followers on Argus. 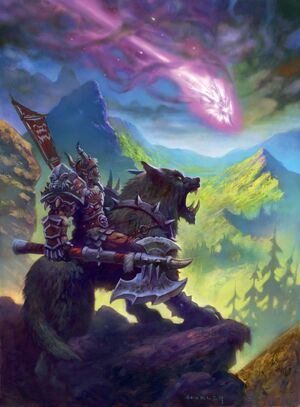 The Genedar crash-lands on Draenor. 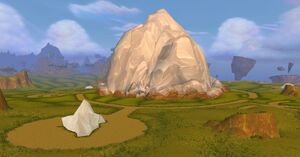 During the Genedar's crash several centuries ago, K'ara was injured, which caused it to enter the Void state of the naaru lifecycle. K'ara's final act was to convince the draenei to eject it from the vessel, but this was easier said than done. The Void energy instinctively caused K'ara to go to war against the other naaru aboard the vessel, D'ore and K'ure. Their violent clash of Light and Void threatened to kill any draenei who interfered, yet Prophet Velen stepped forward nonetheless. He used the Light to shield the other naaru and cast K'ara out of the vessel. But the battle sapped his strength, physically and mentally, and his visions of the future became unreliable.[4] K'ara was ejected from the Genedar in the chaos of the crash, and came to be known as the Dark Star to the orcs of Shadowmoon Valley.

In the time following this event, the orcs came to revere the enormous gem. It became a sacred place and every year the orcs would gather there to celebrate the spring and autumn festival. The shaman would commune with their honored ancestors who, unknown to the shaman, came to dwell within Oshu'gun to commune with K'ure. Recognizing the orcish reverence, the draenei retreated from the mountain. It was the center of orcish culture in Nagrand until the clans became the Orcish Horde. At this point the spirits of Oshu'gun fell silent and the ancestors turned their backs upon the orcs.

K'ure was weakened by the Genedar's crash and had been trapped within the ship for centuries. As his holy energies bled away over time, a void slowly grew in his place — devouring the souls of those nearby. K'ure watched helplessly as generations of orc spirits were consumed by this vortex. Recently, the Burning Legion harnessed this vortex in order to draw countless voidspawn to increase their own ranks, until they were stopped by an adventurer with the aid of A'dal.[5]

The novel Rise of the Horde, which was developed prior to the expansion, presents a slightly different nuance of K'ure's relation to Oshu'gun. Rather than residing within the ship portion of the mountain, K'ure occupied a small pool of water within the crystal itself. During the Orcish festival of Kosh'harg, shaman would enter Oshu'gun and add blessed water to this pool as a ritual to speak with their ancestors. Unknown to those shaman was the fact that the blessed water also helped to sustain K'ure by allowing him to heal himself enough to slow down his dying process. With the help of its energies, the ancient orc ancestors could communicate with living shaman via dreams and visions. According to the novel, after the clans on Draenor became corrupted, these ancestral spirits did not actually abandon the living (though they did spurn the shaman who had betrayed them) nor become consumed by a dark void. Instead, Kil'jaeden and Gul'dan had a demonic barrier/guard put around the mountain which cut off the spirits and K'ure from the outside world.

One naaru aboard the Genedar, D'ore, was all but killed in the crash. His remains were laid to rest by Velen and the draenei in the first crypt of what would become Auchindoun. In the intervening centuries, he had slowly been regenerating. As D'ore lay dormant, the pull of his void energy brought the curse to Auchindoun. The same thing was then happening with K'ure at Oshu'gun.

Oshu'gun was populated by agents of the Shadow Council from the nearby Kil'sorrow Fortress. These included terrorfiends, warlocks torturing the spirits of orc ancestors, and a shivarra along with her warlocks draining the naaru K'ure at the center.

The Consortium, a group of Ethereal traders and smugglers, were planning on harvesting Oshu'gun when word from their leader, Nexus-Prince Haramad, brought the operation to a halt. The nexus-prince mentioned "political situations" in Netherstorm. It seems the Consortium did not wish to upset the naaru.[6]