General Arlos is a high ranking commander in the Valiance Expedition, that fell to the Cult of the Damned's trickery. While there is little description of his personality, according to Harbinger Vurenn, his words rung unsure; as if they were not actually coming from him.[1] This turned out to be true, as it was later revealed he was being magically manipulated by Prince Valanar who was posing as Counselor Talbot.

One day when Arlos was discussing with the other generals about setting up a base in Sholazar Basin, a young woman came into the barracks. This woman was Leryssa and she came to ask him about her 'dead' brother. Arlos didn't care much and asked her to leave.

He was eventually rescued by Thassarian when he was about to be sacrificed to the Lich King by Prince Valanar. 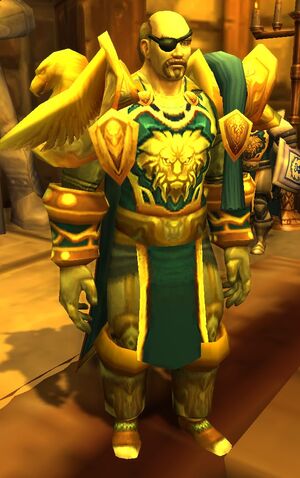 General Arlos in World of Warcraft.