General Colbatann is a level 54 rare mob blue dragonspawn found in Winterspring. In Cataclysm he, unlike the rest of other dragonkin, can still be seen as a rare mob. 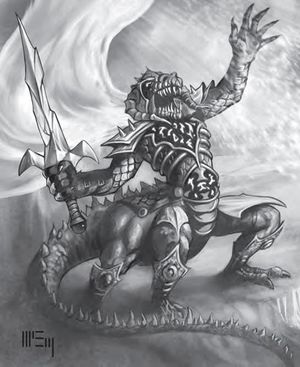 General Colbatann in the RPG

General Colbatann is a powerful male Blue Dragonspawn, who guards the true stronghold of the blue dragons in Winterspring, Mazthoril, under the guidance of the matron Haleh.[1] He is highly intelligent and diplomatic, and is one of the most renowned heroes of the blue dragonspawn. He serves as the leader of their military forces in Kalimdor.[2] Colbatann focuses on the protection of the dragon eggs, which are being stolen by the blacks for some evil purpose.[3] Periodic conflicts occur between the forces of the sorcerer-dragon Colbatann and the night elves.[1]

This blue dragonspawn is a majestic figure, his massive frame covered from head to clawed feet in shining mithril scale armor dotted with glowing blue runes. The greatsword he carries resembles a jagged shard of ice, and his flowing white and blue cloak a rift of snow. General Colbatann is a proud warrior, as well as a cunning tactician and kind-hearted soul. His goal is to eradicate the black dragonflight from the world, but for now, he settles for using his ever-growing army of blue dragons and blue dragonspawn to protect those who require shelter from the evil dragons. He is one of few dragonspawn intelligent and diplomatic enough that, rather than serving a dragon as most do, he is a leader for the blue dragonflight. Colbatann works closely with the blue dragon matron Haleh, and together they plan to strike against Onyxia in Dustwallow Marsh. In combat, Colbatann is usually in a commanding role, and he uses his spells to wear down enemies from a distance, typically beginning with his lowest-level spells to test his enemies’ defenses. If participating in a battle between two large groups, he finds a good place to cast blizzard. If forced into single combat, he keeps his distance long enough to use frost bolt and frost nova to slow his enemy, then protective spells such as mana shield and protection from evil before entering melee.[4]