General Drakkisath was the black dragonspawn ruler of the dragonspawn armies of Nefarian, son of Deathwing. From the pinnacle of Blackrock Spire, he oversaw his forces in their war to drive out the Dark Iron dwarves from the bowels of Blackrock Mountain.

His personal weapon was

[Blackblade of Shahram], which could be looted on his body. 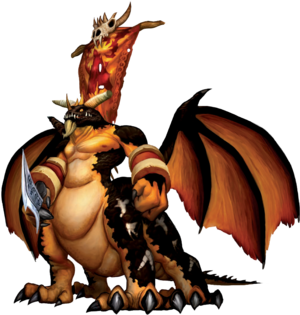 Drakkisath in the Monster Guide. 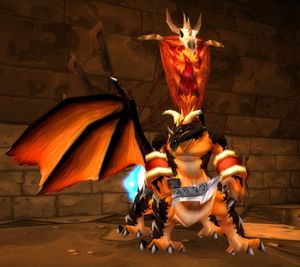 Drakkisath's ultimate goal is to drive his army into the depths in a climactic battle against Ragnaros the Firelord, all in the name of his master Nefarian. Drakkisath is well known for his ruthlessness and total lack of quarter in combat. He shows no mercy and expects none in return. Although quite clearly evil, he commands respect from his troops, primarily because when he gives his word he keeps it. This giant, scaly, four-legged dragonspawn is a mottled orange with dark red and brown stripes. He bears a large banner on his back, wears immaculate plate armor, and carries a scimitar.

Drakkisath would prefer to lead his armies directly, but understands his own importance and doesn’t risk his life in meaningless encounters. Drakkisath has a handful of special attacks and special qualities that set him apart from others of his kind, all granted to him by his draconic lords. If forced to join the fray, he maneuvers to a position where his flame burst ability won’t affect any allies (of course he knows full well that red dragons and other red wyrmkin are immune to fire) and then lets loose with repeated blasts until his enemies are reduced to ash. He targets particularly troublesome foes with black conflagration. Drakkisath can call upon eldritch powers granted by his master, causing a single foe within thirty feet to burst into flames.[2]

Drakkisath is a cruel, mighty warrior and is responsible for the deaths of thousands. He is a clever fighter, well-trained and organized. He knows how best to use his unit, and he knows the capacity of each individual in his army. Drakkisath is always guarded by two of his best warriors.[citation needed]

Like all dragonspawn, he uses his skills, powers, and equipment toward the same end: to protect the dragonflight of his patron and its fellow dragonspawn.

Drakkisath can be found in his throne room behind the Halls of Ascension in Blackrock Spire.

A cunning and ruthless strategist, Drakkisath commands Nefarian's armies in the war with Ragnaros. After securing victories against the Dark Irons, General Drakkisath's forces are positioned to drive the dwarves out of Blackrock Mountain once and for all. 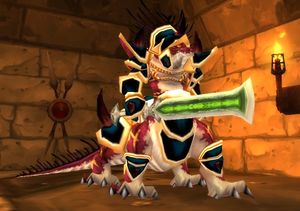 Drakkisath is flanked by his two Chromatic Elite Guards. The party's best chance of success is to engage the guards first, eliminating them while Drakkisath is lured away, or "kited". To this end, a hunter (or any other class that can lose aggro suddenly, such as a rogue with

[Vanish] or a frost mage with

[Ice Block]) can be used to gain Drakkisath's notice and drag him across the bridge back to the Beast's lair or Rend's room. Generally speaking, by the time the hunter has done this the General's guards will be dead. The hunter can then

[Feign Death] (or perish) and when the General returns, it's best to have two tanking classes engage him. Drakkisath's Conflagration attack will cause the victim to become confused and run about in circles all the while dealing AoE damage to nearby party members. This last 6 seconds and deals roughly 3,000 damage to the target. While this effect is in place, the General will turn on the next player highest on his hate list. If two tanks are utilized, there is less of a chance that the General will chase after a priest or mage, or similar class who will fold under his attack. Once the conflagration effect wears off the main tank, they can go back to work gaining aggro and trying to attain second place on the General's hate list as he most likely will conflagrate the second tank. The tanks can trade off aggro in this fashion while the rest of the party whittles the General down. Because of the AoE effect of the Conflagration attack and the General's breath weapon, it's important for the tank to turn the General away from the rest of the party and to maintain some distance from them as well.

A hunter can kite Drakkisath by enabling

[Aspect of the Cheetah] and pulling him with

Should the party feel confident in the number of tanking classes and healers they have at their disposal, they can simply attack all three simultaneously. Killing the guards first as they are easily downed, and then focusing on Drakkisath.

He used to be involved in these quests:

If you are attempting to complete the quest of attunement to Blackwing Lair, you must touch the orb located behind General Drakkisath. (He does not have to be dead, but this requires several seconds of uninterrupted cast time.)