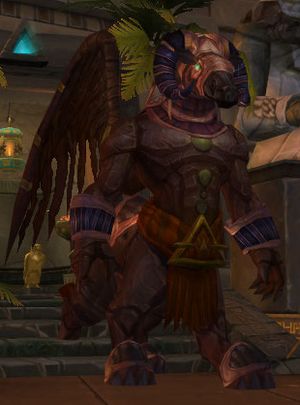 General Husam is a boss of the Lost City of the Tol'vir.

General Husam is one of the tol'vir that was granted his stone form back.

The titans themselves appointed General Husam as one of Uldum's foremost guardians. After Siamat, Lord of the South Wind, cured the Neferset tol'vir's curse of flesh, Husam helmed a rebellion that culminated in the air elemental's imprisonment.

Heroic On heroic, Husam spawns too many traps on the ground around him to safely fight him in one place. Because of this, the tank should kite the boss around the arena to keep the number of traps endangering the party members to a minimum. His shockwaves, the traps, and his Bad Intentions throw will make the battlefield dangerous quickly and the party members need to be quick to react.

Aggro
Invaders! You shall go no further!

Death
Siamat must not be freed! Turn back before it is too late!

Husam appears as one of the bosses that can be encountered in the Tombs of Terror adventure in the Saviors of Uldum expansion for Hearthstone.