General Jakra'zet is a sand troll member of the Zanchuli Council. He earned his place after the Horde crushed his people to dust, and so he does not like them.[2] 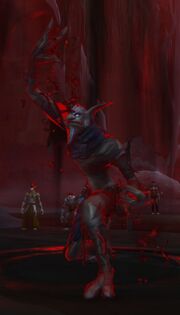 Jakra'zet in the midst of the ritual to resurrect Mythrax.

A decorated Sandfury soldier, Jakra'zet joined the coalition of forces under the banner of the Prophet Zul during the Pandaria campaign. Despite the outcome of the campaign, Jakra'zet's skill in strategy and tactics could not be denied. Eventually, the great Prophet Zul petitioned to promote Jakra'zet to the role of general. Of the Zanchuli Council, Yazma and Vol'kaal voted with Zul for the appointment. Raal and Loti objected, but they were overruled by King Rastakhan, who was curious at what Jakra'zet could accomplish. And thus, Jakra'zet became the first of the Sandfury Tribe to hold the rank of General of the Zandalari army.[3] Jakra'zet holds a great hatred for the Horde, holding them responsible for the Sandfury tribe's downfall. He counselled against Rastakhan granting the Horde a place of honor within Zuldazar, eager instead to execute their representative himself, but was overruled.[4]

Princess Talanji suspected that Jakra'zet plotted something in the deserts of Vol'dun.[5] Jakra'zet oversaw the exile of many Zandalari to Vol'dun, including his personal chef, Sezahjin, who was banished to the desert for cooking a meal that made the general ill. Jakra'zet also exiled any trolls who questioned his actions,[6] including Warguard Rakera, who came close to proving that Jakra'zet was a traitor to the crown.[7] The general subsequently also hired Grozztok the Blackheart and sent assassins to the desert in order to slaughter the exiles.[8][9] Those who distrusted the general were justified: in truth, Jakra'zet and his Sandfury trolls had struck up an alliance with the Faithless emperor Korthek, and together they plotted to unleash the C'Thrax Mythrax the Unraveler from his tomb of Atul'Aman and use him as a weapon to conquer Zandalar and, eventually, all of Azeroth. However, they first had to obtain the three keystones required to break the magical barrier around Atul'Aman.[1][10][11]

Before long, Warguard Rakera's subordinate Bladeguard Kaja and her companions — including the Horde adventurer — ventured into Vol'dun to search for Rakera. At the time, Jakra'zet was conversing with Emperor Korthek, telling him that they needed to speed things up as King Rastakhan had received "nosey visitors". When Jakra'zet noticed the pterrordax mounts of Kaja and her companions passing overhead, Korthek conjured lightning magic that blasted two of the intruders from the sky.[1]

Later, the adventurer encountered Jakra'zet and Grozztok at Atul'Aman, where they were apparently trying to find a way into the pyramid. When Jakra'zet noticed the trespasser, he ordered Grozztok to kill them and then teleported away.[9]

Eventually, the adventurer, Kaja, and Rakera retrieved one of the three keystones and found allies in the form of a group of sethrak led by Vorrik, who held another of the keys.[10] While Kaja and Rakera stayed behind to guard the two keystones at the Sanctuary of the Devoted, the adventurer worked with Vorrik and Vol'dun's vulpera to assault the Faithless sethrak's stronghold and eventually kill Emperor Korthek himself. Meanwhile, however, Jakra'zet — who had already been given Korthek's key — assaulted the Sanctuary of the Devoted and stole the remaining two keystones, meaning that he now had everything he needed to break the seal on Atul'Aman.[11][12] Kaja and Rakera hurried after the general into the great pyramid to prevent him from resurrecting Mythrax and were soon joined by Vorrik and the adventurer.[13][14] Together, the four went to confront Jakra'zet at the Blood Font, where he was in the process of conducting a blood ritual to raise Mythrax from the dead. During the battle, Jakra'zet incapacitated one of the adventurer's companions after the other, but was eventually mortally wounded by the hero. Rakera told Kaja to give the general a clean death, but before she had a chance to do so, a triumphant Jakra'zet jumped into the nearby pit, killing himself and thus performing the final blood sacrifice needed to resurrect Mythrax.[15]

I don't care what deal ya think to barter from da King and his daughter. Know that ya not welcome in Zuldazar.

And while da Princess may have a lot of authority, she not be queen yet.

Until then, da real power of Zuldazar lay with me and da Zanchuli Council.

Jakra'zet says that the Horde laid waste to his people.[2] This could refer to potential adventurers of the Horde who might have raided either Zul'Farrak or the Throne of Thunder.