Rajaxx and his forces during the Ruins of Ahn'Qiraj encounter.

General Rajaxx comes out to taunt you during the gate-opening event.

General Rajaxx is a primary militant commander of the qiraji, and the second boss of the Ruins of Ahn'Qiraj.

During the War of the Shifting Sands, the monstrous, towering Rajaxx commanded the qiraji and silithid in battle, swinging clawed limbs and shouting commands to his soldiers. During the war, he clashed with Fandral and Valstann Staghelm, the leaders of the night elf forces, and later personally executed Valstann by ripping him in two with his claws.[1]

This is not a traditional fight. Before you actually fight Rajaxx, you must defeat an entourage of his War ranks, each with a pack of mobs. Each wave consists of an Officer, and a varying mix of Swarmguard Needlers and Qiraji Warriors. There are seven waves before Rajaxx:

Swarmguard Needlers and Qiraji Warriors can be frozen, feared, rooted, and stunned.

Taking advantage of these crowd control methods can allow a raid to divide or disable the enemy for easier handling.

For example, a raid may disable or delay Qiraji Warriors while the deadly but fragile Swarmguard Needlers are eliminated, as well as allowing a raid to quickly kill sub-bosses with particularly dangerous abilities such as Tuubid and Drenn. 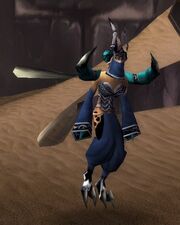 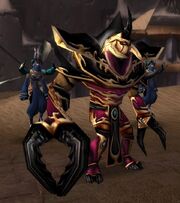 Once Kurinnaxx is dead, 5 NPCs will spawn: Lieutenant General Andorov and 4 Kaldorei Elite. These NPCs will aid you in the battle to and against Rajaxx, so make sure you keep them alive. They can be healed and given an Earth Shield. You can also buff them with single paladin buffs. Once you talk to Andorov, the encounter will begin.

Andorov will passively heal the raid every 3s via Aura of Command, while increasing the casting speed and attack power of anyone who is Neutral or higher with the Cenarion Hold by 10%.

On every waves, CC the adds and kill the officer as soon as possible. Once the officer is dead, slowly finish off the rest of the adds. This is especially crucial on the 2nd wave, as Tuubid will mark a single target causing all the adds to aggro on that target.

Fear prevention measure must be taken to counter Qeez's AoE fear. The tank must be careful on Drenn, as his hurricane ability can deal significant damage towards Andorov. The tank must move him away if this happens to get Andorov out of the hurricane. Pakkon should be tanked towards the wall, facing away from the raid as to mitigate Sweeping Slam. Zerran's enlarge must be dispelled.

Rajaxx will appear after all 7 waves are cleared. The raid must positioned themselves near the wall as to mitigate the knockback effect of Thundercrash. It has a minimum of 100 nature damage. The tank must be quick to get aggro after. If Andorov is alive, he'll heal the raid(except the tank) above the threshold for instant kill. If Andorov is dead, the healers must keep everyone healthy.

Rajaxx may also drop aggro on his current target. The tank must quickly pull aggro off Rajaxx when this happen. If Andorov is dead, then an offtank must be ready to get aggro whenever this aggro drop occur.

If the NPCs are still up once you've killed Rajaxx, you can wait a few minutes and they will despawn and give you 150 reputation with Cenarion Hold. You can also pull mobs to them and let them take care of business while you wait for them to despawn.

Opening of Ahn'Qiraj
Soon you will know the price of your meddling, mortals... The master is nearly whole... And when he rises, your world will cease!

Aggro
Impudent fool! I will kill you myself!

Disengaging after following player through entrance gateway
Run if you want cowards! It will do you no good!