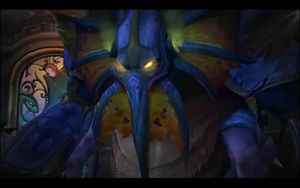 General Vezax in the Ulduar trailer.

General Vezax is the twelfth boss encounter in Ulduar. He can be found in the Descent into Madness guarding the Prison of Yogg-Saron. Mana-based classes will have to deal with a lock on their regen, but will be able to restore it by destroying crystals that drop a residue on the floor. The Elite mode requires players not to break any of these crystals and not regen any mana.

Vezax is a "memory" in the fight against Argent Confessor Paletress in the Trial of the Champion encounter of the Crusaders' Coliseum.

Strange creatures known as faceless ones lurk in the depths of Ulduar. One of their mightiest commanders, General Vezax, guards the twisted passages leading to the Prison of Yogg-saron.[1]

General Vezax inflicts all healers with Aura of Despair, removing all mana regeneration. Mana can be restored by utilizing the Saronite Vapors that coalesce on the ground in the area.

Before pulling, assign casters in circle around General Vezax at a fair distance of each other in order to avoid spreading the Mark of the Faceless and too many (unreactive) people being hit by a Shadow Crash.

When the tank pulls, all healers must come in melee range of the boss (< 15 yards), in order not be concerned by the Mark of the Faceless and to leave the greatest space to the casters.

Searing Flames must always be interupted when General Vezax starts casting it.

When General Vezax casts Surge of darkness, the tank can stay where he stands, since Vezax's damages are healable.

After every Surge of darkness, a melee or unoccupied ranged dps should go to kill the closest Saronite Vapor. All healers stand in until they have 6-7 debuffs, then step out. If that first regen is not enough, they can step in the vapor for another 6-7 debuffs (once the first 6-7 debuffs have ticked off).

If the next Saronite Vapor is not near the boss, the tank will have to move toward it. All the raid must proceed very carefully (healer and melee still in the 15 yards) and casters still spaced from one another.

Due to the use of the Energy Field left by a Shadow Crash, casters are less likely to have the need of a Saronite Vapor until the fourth or fifth Surge of darkness. When they will need it, while coming in melee range, they must be carefull not to be afflicted by a Mark of the Faceless. As long as DPS watch the aggro list, they can do damage continuously (the General is not tauntable, so overhauling the tank will usually result in the death of the careless DPS player and possibly the entire raid).

When a Shadow Crash heads toward a caster, he must move to avoid the AoE and then come back to stand in. In order to avoid spreading the Mark of the Faceless, only the caster targeted by a Shadow Crash should stand in it.

In order to save mana, casters would be advised to DPS only when they stand in the Energy Field left by a Shadow Crash. While this can be frustrating, this is the safer way to save the Saronite Vapors for the healers' need, besides the 10 minutes enrage allows to do it safely.

To successfully perform this elite mode, players must fight Vezax for long enough without using six Saronite Vapors that spawn, defeat the Saronite Animus that spawns, and then kill Vezax. To help somewhat with mana regen, a raid can stock up on [Fel Mana Potion], or alternatively [Dark Rune]. Ranged DPS will have to spare their mana for when they are on a shadow crash puddle to maximize the damage they can get with it. Aim towards getting General Vezax's health as low as possible without actually killing him. (Below 8,000,000 is doable). With higher levels of gear, it's entirely possible to kill Vezax BEFORE the Animus spawns - if this happens, the group will not be awarded achievements, and no elite mode loot will drop.

The animus spawns at Vezax's starting position and must be picked up immediately by the offtank and kept in place so that melee does not have to move when switching targets at all. It will spam profound darkness every two seconds and melees for just about as much as Vezax without the periodic enrage) All DPS must switch to the Animus and kill it as quickly as possible. If the raid takes too long, Profound Darkness will eventually outdamage any possible healing and wipe the raid. Shadow Crashes will one-shot anybody that gets hit by them so do not lose focus. Since the fight has been patched, Vezax no longer casts searing flames while the animus is up. Vezax will regain some health from Mark of the Faceless, so one player has to reapply a healing debuff onto him to minimize it such as an Arms Warrior with

[Mortal Strike] or a Combat Rogue with

After the animus is dead, the stacks will still be applied and all that is left to be done is finish the home stretch of Vezax's health. Keep in mind that the Profound Darkness debuff is still applied and Shadow Crashes will kill anybody that does not avoid them. The hard part of the achievement is done so long as nobody in the raid does something foolish to cause a wipe.

The following achievements are for the encounter's elite mode.

Aggro
Your destruction will herald a new age of suffering!

Surge of Darkness
The black blood of Yogg-Saron courses through me! I. AM. UNSTOPPABLE!

Berserk
Your defeat was inevitable!

World of Raids Tactics for General Vezax based on PTR testing.
Retrieved from "https://wow.gamepedia.com/index.php?title=General_Vezax&oldid=5546542"
Categories: