The genesaur are a race of colossal and immensely powerful plant-like demigods native to Draenor. They are the dominant race of the collective of plant creatures known as the Primals, and are worshipped as deities by their lesser relatives. While not the most powerful genesaur encountered, Iyu is the most directly antagonistic and the one who most directly commands the botani.

The genesaur were hunted to extinction by the Old Horde in the main universe, but they are still present in the Draenor of an alternate timeline.

As the stone giant Grond battled the Sporemounds, pieces of the battling leviathans fell to the earth and gave rise to new types of creatures. The plant matter that tumbled from the three Sporemounds Zang, Naanu and Botaan contained a small portion of their life essence and gave rise to many unique beings, the strongest of which were the mighty genesaur. Meanwhile, the boulders that toppled from Grond grave rise to the colossals and elementals. After Grond's death at the hands of Botaan, the stone giant's creator Aggramar empowered the colossals to continue the fight against the minions of the Evergrowth, who had begun to reclaim the lands that Grond had destroyed. The colossals were determined to bring balance to Draenor, but it was an enormous task, for the Evergrowth had enveloped much of the world and Botaan now eclipsed Grond in size, stalking through the jungles alongside hundreds of genesaur. The Sporemound would have to be drawn away from the Evergrowth if the colossals had any chance of succeeding, and so they drew its ire by hacking way at the forests at the Evergrowth's edge. Botaan rallied the genesaur and stormed toward the colossals, who retreated into barren ravines and hills that would give them the advantage. Botaan followed them as it saw the colossals as only pale imitations of Grond, and when it left the borders of the Evergrowth the colossals attacked with their full might. The ensuing war shook Draenor for thousands of years, with control of the world constantly moving back and forth between the two forces.[1]

The colossals finally decided to sacrifice themselves to kill Botaan in a massive explosion. The spores from Botaan's corpse settled in the wilds, giving sentience to existing forms of plants and causing many new beings to take shape. The botani were the most prolific new race and worshipped the genesaur as gods, seeing them as echoes of the great Sporemounds, faint memories of which lingered in their minds. The botani, genesaur and other plant-creatures were known collectively as the Primals, and their devotion to protecting the forestlands inevitably caused them to clash with the Breakers, the descendants of Grond. For many long ages, the two factions engaged in sporadic battles with one another, neither side ever managing to destroy the other.[1]

The birth of Taala

2,000 years before the opening of the Dark Portal, a treant named Gnarlgar learned of the ancient history of the Evergrowth and the Sporemounds from the genesaur. The treant became the caretaker of the botani of Talador, teaching them unique ways to harness nature magic. The botani crafted pools of potent nature energies, which they used to transfer the spirits of fallen genesaur into new bodies. When Gnarlgar began creating a new Sporemound named Taala and commanded the Primals to march to war against the Apexis arakkoa, new genesaur were awakened from the botani birthing pools. The genesaur marched on the Apexis spire along with the other Primals, but much like their kin, thousands of them were incinerated by the Breath of Rukhmar.[2] 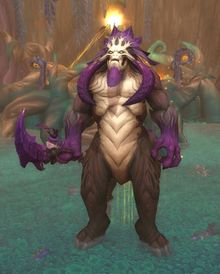 The Blooming Genesaur, cultivated by the botani of the Blademoon Bloom.

Thousands of years later, the Orcish Horde marched across Draenor. Kilrogg Deadeye led his Bleeding Hollow clan on a campaign into the lush, isolated island of Farahlon, the last bastion of the Primals. After crossing the ocean with the help of ogre shipwrights, orc warlocks leeched life from the Primals and used the stolen power to set the forests ablaze while Kilrogg and his army slaughtered every botani and genesaur they could find.[3]

On the alternate Draenor, the genesaur are still prevalent in the wilds of Gorgrond. The genesaur Iyu and its many botani followers were a major and recurring obstacle faced by adventurers and their allies during the campaign in Gorgrond. The giant was finally defeated at Moira's Bastion, which it was drawn to by the Will of the Genesaur, a botani artifact retrieved by the Dark Iron dwarves. Shortly after Iyu's defeat, the adventurer and their allies used the Will against the forces of Commander Gar, who destroyed the device with an artillery attack before he himself was killed.[4][5]

In Shadowmoon Valley, the botani of the Blademoon Bloom began attacking wandering travelers and dragging their bodies back into the bloom to fertilize a growing genesaur — the first reported case a of genesaur being born on Draenor in over three hundred years. Luckily, the rangari were able to kill the genesaur with the aid of an adventurer before it managed to grow to maturity.[6]

The Kirin Tor attempted to construct an outpost known as the Violet Bluff near the Blackrock Foundry with a portal linking back to Stormwind City, but as they unwittingly built it in the midst of the sacred Everbloom the outpost was quickly overrun and infested by Primals. Yalnu, mightiest of the genesaur,[7] was drawn to the strange energies emanating from the portal and sensed a new world where his kind could flourish and spread unchecked. While Yalnu did manage to cross the portal into Azeroth, it was quickly slain by the Kirin Tor and a group of adventurers before it managed to spread the overgrowth further.[8]

The genesaur are lumbering, four-legged giants and demigods who date back to the Age of Colossals, when giants shaped the terrain of Draenor amidst constant warfare.[1][9] Khadgar describes the genesaur as the closest one can get to the primordial creatures who shaped all life on Draenor.[10] A mane of thick fronds covers the genesaur's skin, and despite their enormous size, they are incredibly swift and agile.[1] They are considered to be among Draenor's most vicious creatures.[11]

Much of this mighty race has died out, and it is relatively rare to see a genesaur in the wild.[12] The botani have retained the ability to communicate with these bastions of life, and genesaur are revered as gods in their culture. Draenei have not yet determined if genesaur are immortal or not; genesaur emerging from botani-tended pools often retain the memories and will of their long-dead forebears. Adventurers fortunate enough to catch a glimpse of these rare beings are cautioned to give genesaur a wide berth. They are deceptively quick given their size and destroying them will take a small army of well-equipped heroes.[9] 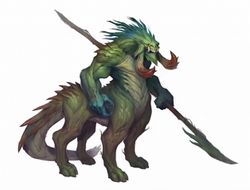