Genocide of the draenei

“How easily the mind can be turned to hate from a place of fear.”

— Warchief Thrall, reflecting on the orcs' actions on Draenor

The genocide of the draenei was a major conflict that occurred on the planet of Draenor between the world's draenei inhabitants and the newly-created Orcish Horde.

Having been persuaded and corrupted by agents of the demonic Burning Legion, the various orc clans of the planet Draenor united to form a new force known as the Horde. Now, they were directed to utterly wipe out the planet's other most powerful race, the draenei, who had been fleeing the Legion's wrath for millennia by moving to new worlds when they had been discovered.

With relatively little effort due to the vastly larger numbers of the united clans and newly-gained powers, the Horde succeeded in pushing the draenei back from many of their major settlements and strongholds. Although confused by the orcs' sudden aggression and drive to make war on them, the draenei nonetheless did their best to preserve their civilization. Ultimately, however, they were overwhelmed and forced back to their last bastion and capital in the form of Shattrath City. Realizing that there existed no hope of overcoming their foes, the draenei leader Velen reluctantly led a group of refugees into hiding away from the battle. Utilizing their new demonic abilities, the orcs breached and sacked the city.[1]

In the period following the Horde's victory over the draenei, and believing that no more of their adversaries remained, the orcs turned their attention to a new conquest, in the form of the distant planet of Azeroth.

Pact with the Legion

This section contains information that is out-of-date. Reason: The severing of the elements happened later in the storyline, as indicated by Oronok Torn-heart already being a warlock for a long time when it happened. 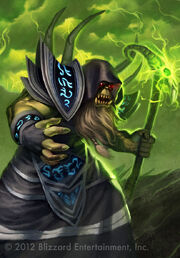 Gul'dan, Betrayer of the Orcs

In the years following the draenei flight from their home planet of Argus to escape the wrath of their brethren who had joined the Burning Legion, the demon lord Kil'jaeden dedicated himself to hunting down these exiles, feeling betrayed at Velen's refusal to accept Sargeras' 'gift'. Having pursued Velen's draenei across many worlds, Kil'jaeden decided to employ a new strategy when he discovered their presence on the world of Draenor.

He planned to use one of Draenor's native species—the orcs—to destroy Argus's exiles, believing that the draenei would not realize the threat until it was too late. To this end, the demon lord contacted the ambitious chieftain of the Shadowmoon clan, Ner'zhul, and through deception convinced him to rally the other orc clans. Appearing to the Elder Shaman as a heavenly being, Kil'jaeden was able to convince Ner'zhul that the draenei were, in fact, plotting the wholesale destruction of the orcs and that they needed to be crushed swiftly before it was too late.

Ultimately, Ner'zhul discovered Kil'jaeden's deception but was unable to stop events already in motion as his apprentice Gul'dan took his place, fully aware and unconcerned about the demon's lies. Gul'dan soon began to spread the Burning Legion's demonic influence to the other orcish clans, overseeing the creation of warlocks who wielded the demons' power as their own, and convincing the other clans to consume the blood of the Pit Lord Mannoroth. Through his efforts with the Cipher of Damnation, Gul'dan severed the orcs' ties to their ancestors and the elements at what would then become known as the Hand of Gul'dan, and placed them on the path to war with the draenei. Finally, he directed Blackhand, chieftain of the Blackrock clan, to lead this new orcish army, this horde, against their unsuspecting enemies as Warchief.[1]

Having overseen the creation of numerous warlocks among the orcish race as well as some ogres, Gul'dan now formed the Shadow Council, consisting exclusively of the most powerful warlocks, to direct the Horde behind the scenes and commune with their demon masters. As the orcs began to launch their first major attacks on draenei territory, the Shadow Council ensured that the Legion's corruption would be left in their wake, often seen in the form of an ominous red mist. Even those orcs who had refrained from consuming the demon blood, such as the majority of the Frostwolf clan, began showing signs of corruption, such as their skin turning from the normal brown to a bright green.

This corruption emanating from the Horde's presence also affected many of the draenei who survived the initial attacks, often causing them to become mutated broken or insane lost ones. Even the very land of Draenor succumbed to the demonic taint, with much of the planet dying or becoming barren and inhospitable.[1]

Meanwhile, the draenei, unable to counter the Horde's vastly larger numbers and newly-acquired powers, were in a constant state of retreat. They were pushed farther and farther back, with major bases like Tuurem falling rapidly to the Horde's onslaught. Fully intending to drive the draenei to extinction, as ordered by their master Kil'jaeden, the orcs showed no mercy to any they encountered as they pushed deeper into their enemies' lands. Even the spiritual center of the draenei, the sacred Temple of Karabor, was lost when Gul'dan ordered it to be conquered and promptly transformed it into the headquarters of his Shadow Council. Eventually, one of the last bastions of resistance remaining was the draenei capital of Shattrath City.

Understanding that they could not succeed in defeating the Horde, Prophet Velen was reluctantly convinced to flee the city before it fell, along with a small group of refugees, while enough forces stayed behind to give the impression that the draenei had made their last stand in the city. Despite a stalwart defense, and the best efforts of many of the draenei people's best champions such as Vindicator Maraad[2] and Nobundo, Shattrath City was breached, and the orcs flooded in. As infernals crashed into the city's structure, and the warlocks' red mist seemingly cut off the draenei paladins' and priests' connection to the Light itself, Shattrath's defenses collapsed. The majority of the capital's inhabitants were slain either during or after the battle.

Kil'jaeden, upon hearing of the city's fall and the apparent extinction of the draenei, was exultant at finally having gained vengeance on those he considered to have betrayed him. Unbeknownst to Kil'jaeden or the Horde, however, Velen and his group of survivors had escaped the slaughter. The draenei leader led what was left of his people into hiding in the region of Zangarmarsh, leaving the orcs to believe they had been wiped out. Though they had suffered irreparable damage in the conflict, the draenei survivors retained their faith in the Light and maintained hope for the future of their race.[1]

The Horde's desire for conquest only grew with their victory over the draenei, and they began to long for new enemies to battle and new lands to conquer. Kil'jaeden, however, was finished with the orcs; having used them to do his bidding, there remained no reason to spend any more time on them. Anxious with the lack of communication from his master, Gul'dan was suddenly contacted by a different entity: a powerful sorcerer on another planet named Medivh. 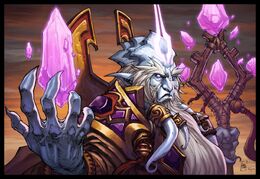 With Medivh's aid, the Horde began construction of a gateway, the Dark Portal, which they were told would allow them to reach a new world ripe for conquest. Under the instructions of Medivh (who was, in fact, under the sway of the Burning Legion's master Sargeras) the portal was completed, and the Orcish Horde began its invasion of the world of Azeroth.

In hiding, the draenei were still affected as the planet continued to suffer from demonic influence. Many degenerated into broken or lost ones, and lost their ability to wield the Light as their connection to it became severed. This led many former draenei to lose faith in the Light altogether and despair. Farseer Nobundo would later teach many broken, including the Ashtongue leader Akama, the ways of shamanism.[3]

Decades later, Velen would lead a raid on the once-Naaru controlled ship of the Exodar. Using it to escape Outland (what Draenor had become known as) the draenei soon learned that the ship had been sabotaged by the blood elves they had seized it from. Ultimately, it crash-landed on the planet of Azeroth, and the draenei, emerging battered but intact into the new world, were aided by and joined the Alliance. Since their arrival on the new world, the draenei remain dedicated in their opposition to the Legion, further bolstered by the sacrifices of their brethren on Draenor.

The crimes committed by the orc warriors against the countless innocent draenei would continue to haunt many veterans even after Thrall led them back to their traditional and shamanistic roots. High Overlord Saurfang in particular claims that the corrupted orcs had no reservations about killing draenei children. The sound of their screams apparently reminded him of swine being slaughtered for their meat.[4]

Not all orcs were corrupt -- such as Durotan of the Frostwolf clan and Jaruk Bloodfyre from the Shadowmoon clan, who saved a draenei girl named Leena.[5]

There were significantly fewer draenei than united orcs.[6] The orcish ranks were swelled up by demons and artificially-aged warriors.