A geomancer practices a crude form of shamanism[1] known as geomancy. Geomancy is a practice of divination[citation needed]  and elemental combat native to several humanoid races of Azeroth.

Many races and factions on Azeroth have geomancers, including ogres, pandaren, kobolds, quilboar (including the Death's Head group), troggs, the Grimtotem tribe of tauren, and even the Twilight's Hammer clan.

The ogres of Draenor practice geomancy on a large scale.[3]

Trogg geomancers practice a fairly basic form of geomancy in comparison to races such as the pandaren and quilboar. It's primarily aggressive and unknown whether the emphasis on spiritual affinity is as relevant to their people. They are particularly talented with the element of fire.[citation needed]

The quilboar utilize their elemental understanding to combat the press of orcish settlements upon their native lands. The predominant religious ruling group of the quilboar, the Death's Head, wields an impressive legion of geomantic quilboars. Like the pandaren, the geomancers of the quilboar use all elements in relative amounts.[citation needed]

Kobolds also practice a fairly basic level of geomancy, much like the troggs. It is likely that the kobolds invested in this study and beliefs due to their underground dwellings and familiarity with stone and earth. Like troggs, kobold geomancers are particularly gifted with fire.[citation needed] 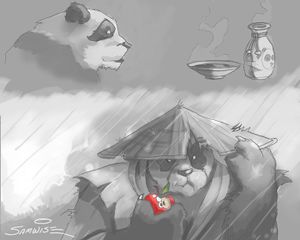 In combat, the normally peaceful geomancers can be fierce. The spirits of the land, beholden to the geomancers for their happiness, are only too willing to fight on their behalf. Those who run afoul of geomancers in battle find that the very land may rise up, taking the form of rock and stone elementals. The legends still speak of geomancers capable of calling up the earth to destroy the settlements of their enemies with devastating earthquakes.[4] A known pandaren geomancer is Raiden.

Geomancy is an aggressive practice, the power drawn from the elements used offensively as opposed to defensively. A geomancer has the ability to manipulate the spirits of nature into a devastating power through ritualistic dance and rune-making, often done in the earth itself. These rituals are done in attempts to earn the trust and honor of the earth, not unlike a shaman's converse with the spirits of the elements, so that a fully-fledged geomantic warrior may effectively call upon these powers.[citation needed]

It is in this belief system that geomancers strive to reform the land to appease both their spirits and the earth's.[citation needed]

The main difference between a geomancer and a shaman is in fighting style and method through which the trust of the elements is gained. A shaman speaks directly with the elemental spirits, whereas a geomancer uses forms of devotion dances and rune-making to impress the elements as a whole.[citation needed]

"Much like the night elf druids, the pandaren mystics developed an affinity for the spirits of the earth. These hearty mystics developed the practice of geomancy - and learned to wield the fury of the earth by appeasing the restless elemental spirits. Many geomancers have been known to summon various types of rock and stone elementals, and great geomancers have even caused catastrophic earthquakes to swallow enemy armies."[5]

Geomancy (from Old French geomancie < Late Latin geōmantia < Late Ancient Greek γεωμαντεία/geōmanteía < γῆ/gê, "earth" + μαντεία/manteía, "divination") from the eponymous ilm al-raml ("the science of sand"), is a method of divination that interprets markings on the ground, or how handfuls of dirt land when someone tosses them. The Arabic tradition consists of sketching sixteen random lines of dots in sand.

In Africa one traditional form of geomancy consists of throwing handfuls of dirt in the air and observing how the dirt falls. In West Africa, geomancy involves a mouse as the agent of the earth spirit.

In China, the diviner may enter a trance and make markings on the ground that are interpreted by an associate.