From Wowpedia
(Redirected from Geyah)
Jump to: navigation, search

Not to be confused with Overlord Geya'rah.

Greatmother Geyah is the ailing spiritual leader of the Mag'har, located at the Horde outpost of Garadar in Nagrand. Formerly of the Frostwolf clan, she was the mate of one chieftain (Garad), the mother of another (Durotan), and the grandmother of the previous Warchief, Thrall.

Legends: A Warrior Made 1

Geyah was present at the showing of newly-born Draka. She told young Durotan to give Draka a blessing.[1] 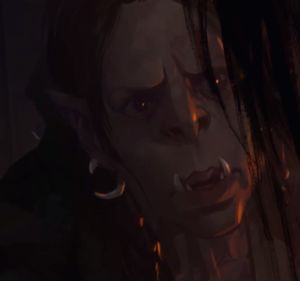 Geyah in Lords of War.

Long before the opening of the Dark Portal, Geyah would hunt clefthoof along with the other members of her clan. One time, she was bitten by a drift lurker which caused her to enter a deep sleep. While her middle son, Ga'nar, wanted to leave her, Durotan didn't. After Ga'nar left, Durotan and her companion, Stormfang remained and tended to her for several days. At some point a pack of garn attacked. She awoke only to see Durotan lost in bloodlust. When she spoke to him, he found out he also killed Stormfang. She told him she would rather die than to know that her son had become a beast.[2] 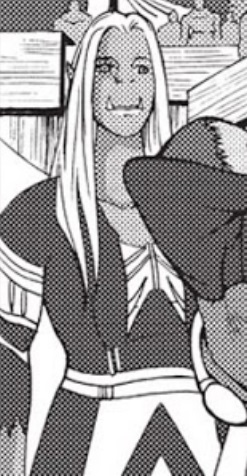 In the years before the rise of the Horde, a virulent plague known as the red pox spread throughout the clans. Geyah, rather than abandon the afflicted, established a quarantined settlement in the region of Nagrand, hoping to care for the victims while limiting exposure. She named it Garadar, after her late husband.[3] Among Geyah's patients were the children of several chieftains, including Garrosh Hellscream and Jorin Deadeye. As the clans gave the settlement a wide berth, the orcs therein were not forced into joining the Horde or the blood pact with Mannoroth. From afar, Geyah watched in disgust as the brown skin of the Horde turned a sickly green and once-verdant lands died. However, Geyah and those in the village, sickened though they were, remained Mag'har, uncorrupted.

After the Frostwolf clan was exiled, Durotan and Draka visited Geyah and Draka told her that she was pregnant. Durotan added he would be named as Go'el.

Before Varok Saurfang crossed the Dark Portal, he had Geyah and the other elders of Garadar hide his son Dranosh away so the orcish warlocks would not find him, due to a promise made to his mate before her death.[4]

Shortly before Draenor's destruction, Geyah was visited by Kargath Bladefist, who had stumbled upon the village by accident and demanded that every able-bodied warrior come to his aid in assisting Ner'zhul's nefarious plans. Geyah, naturally, refused to aid her corrupted brethren, not that she could have anyway, as most of the village was still suffering from the Red Pox.[5]

Geyah has taken the role of a clan mother and thus Kashur speaks to her in her dreams.[6] 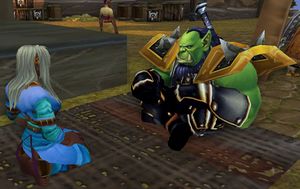 After completing a large series of quests in Nagrand players are sent to Geyah to help communicate with the spirits of the land and heal them. Once this quest line is complete she will converse with the player about Garrosh and his fitness to lead. She will state the player reminds her of her son Durotan. Upon hearing this name your conversation will then tell her of Durotar and of the leader of the horde, Durotan's son, Thrall.

After the Mag'har joined the new Horde, Geyah instructs the player to "go to my grandchild", Warchief Thrall in Orgrimmar, and inform him "his blood is here — in this shattered world", and that "his father's legacy lives on." Thrall sends the player back to her, to "tell her that her grandson comes".[7]

After the cutscene of his visit to Nagrand, Thrall sat down with the Greatmother and she revealed the name his parents intended to give him - Go'el.

Just before the Shattering of Azeroth, Thrall, hoping to save Azeroth, returned to Garadar to learn more of the ways of the elements from Geyah. Geyah, being advanced in years, instead instructed Aggra, one of her students, with the task of teaching her grandson. Aggra expressed her disapproval of Geyah's decision, as she considered Thrall to be a traitor with a "horrid slave name". Geyah mused that she assigned Aggra the task for no other reason that it would amuse her to see the two interact with each other.

After some time spent in the company of both Aggra and Geyah, Thrall asked his grandmother why she put up with Aggra's sharp tongue and disrespect, and Geyah responded that she would be a fool to surround herself with people who did not challenge her way of thinking. Geyah then played a minor role in Thrall's vision quest and looked on as Thrall and Aggra came to care for each other.[8]

An alternate Geyah is present in the alternate Draenor in the past during the war in Draenor.

Geyah from a separate timeline[9] appears in the movie continuity.